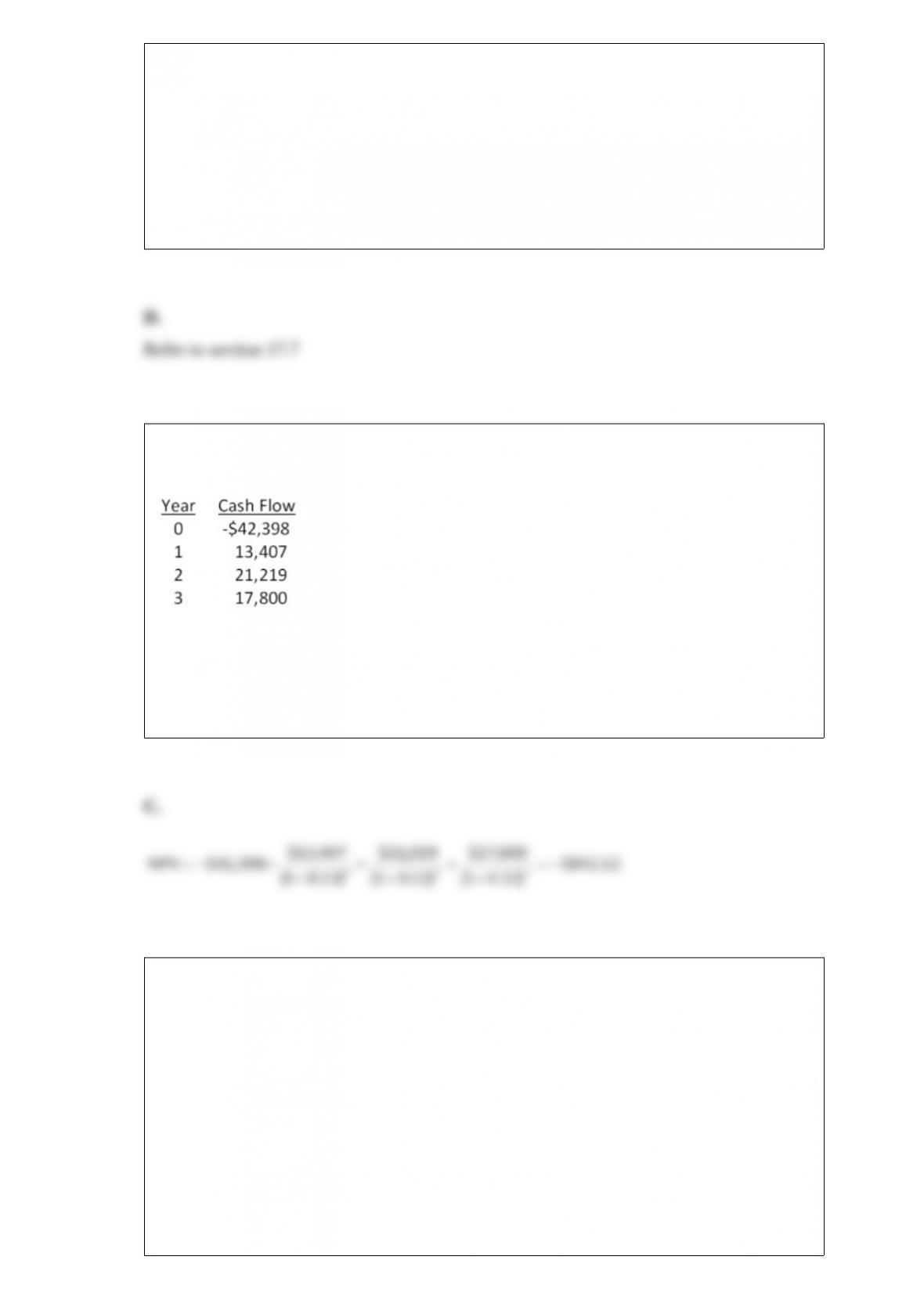 Which one of the following statements correctly applies to U.S. industrial firms based
on the period of 1984 -2004?
A. Earnings growth rates tend to lag dividend growth rates.
B. Dividends tend to fluctuate significantly from quarter to quarter.
C. The percentage of these firms paying dividends in 2004 was higher than in 1984.
D. The total amount of dividends paid by these firms was greater in 2004 than in 1984.
E. Non-dividend paying firms in 1984 were more apt to commence paying regular
dividends than to implement a stock repurchase program.
What is the net present value of a project with the following cash flows if the required
rate of return is 12 percent?
A. -$1,574.41
B. -$1,208.19
C. -$842.12
D. $729.09
E. $1,311.16
Yesterday, the president of RB Enterprises received a phone call from DLK, a
competitor. DLK is a sole proprietorship. An unexpected family situation has caused the
owner to suddenly want to retire and relocate closer to his family. Thus, the assets of
DLK are being offered to RB Enterprises at a bargain basement price. While RB
Enterprises had not anticipated purchasing these assets, it was decided that the
opportunity was too good to pass up. This illustrates which of the following needs to
hold cash?
A. precautionary
B. transaction
C. speculative
D. compensation
E. float 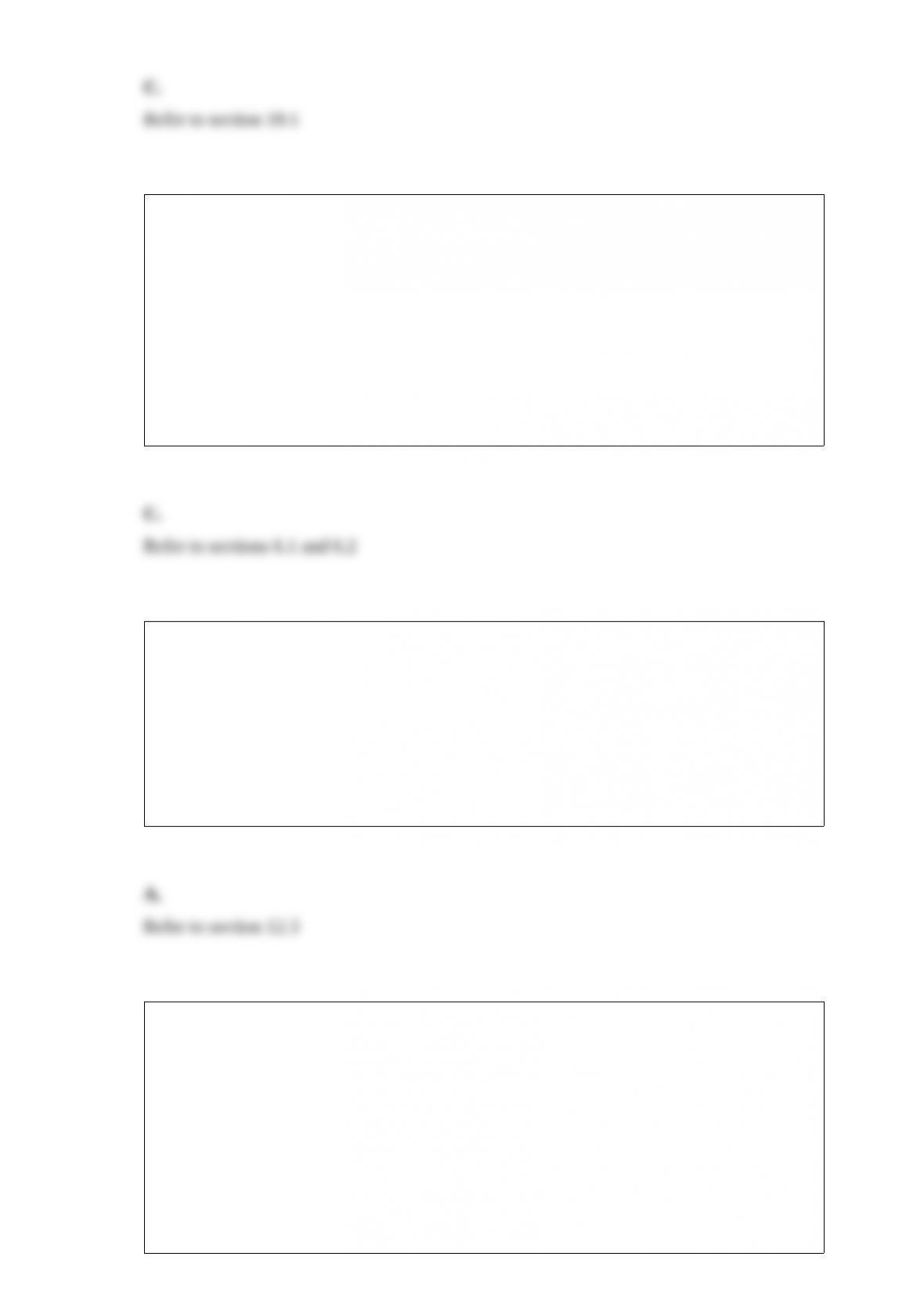 You are comparing two investment options that each pay 5 percent interest,
compounded annually. Both options will provide you with $12,000 of income. Option A
pays three annual payments starting with $2,000 the first year followed by two annual
payments of $5,000 each. Option B pays three annual payments of $4,000 each. Which
one of the following statements is correct given these two investment options?
A. Both options are of equal value given that they both provide $12,000 of income.
B. Option A has the higher future value at the end of year three.
C. Option B has a higher present value at time zero than does option A.
D. Option B is a perpetuity.
E. Option A is an annuity.
Last year, T-bills returned 2 percent while your investment in large-company stocks
earned an average of 5 percent. Which one of the following terms refers to the
difference between these two rates of return?
A. risk premium
B. geometric return
C. arithmetic
D. standard deviation
E. variance
Jamestown Supply is trying to decide whether to lease or buy some new equipment.
The equipment costs $72,000, has a 4-year life, and will be worthless after the 4 years.
The equipment will be replaced. The cost of borrowed funds is 9 percent and the tax
rate is 34 percent. The equipment can be leased for $23,800 a year. What is the amount
of the aftertax lease payment?
A. $13,897
B. $14,250
C. $14,667
D. $15,708
E. $15,820 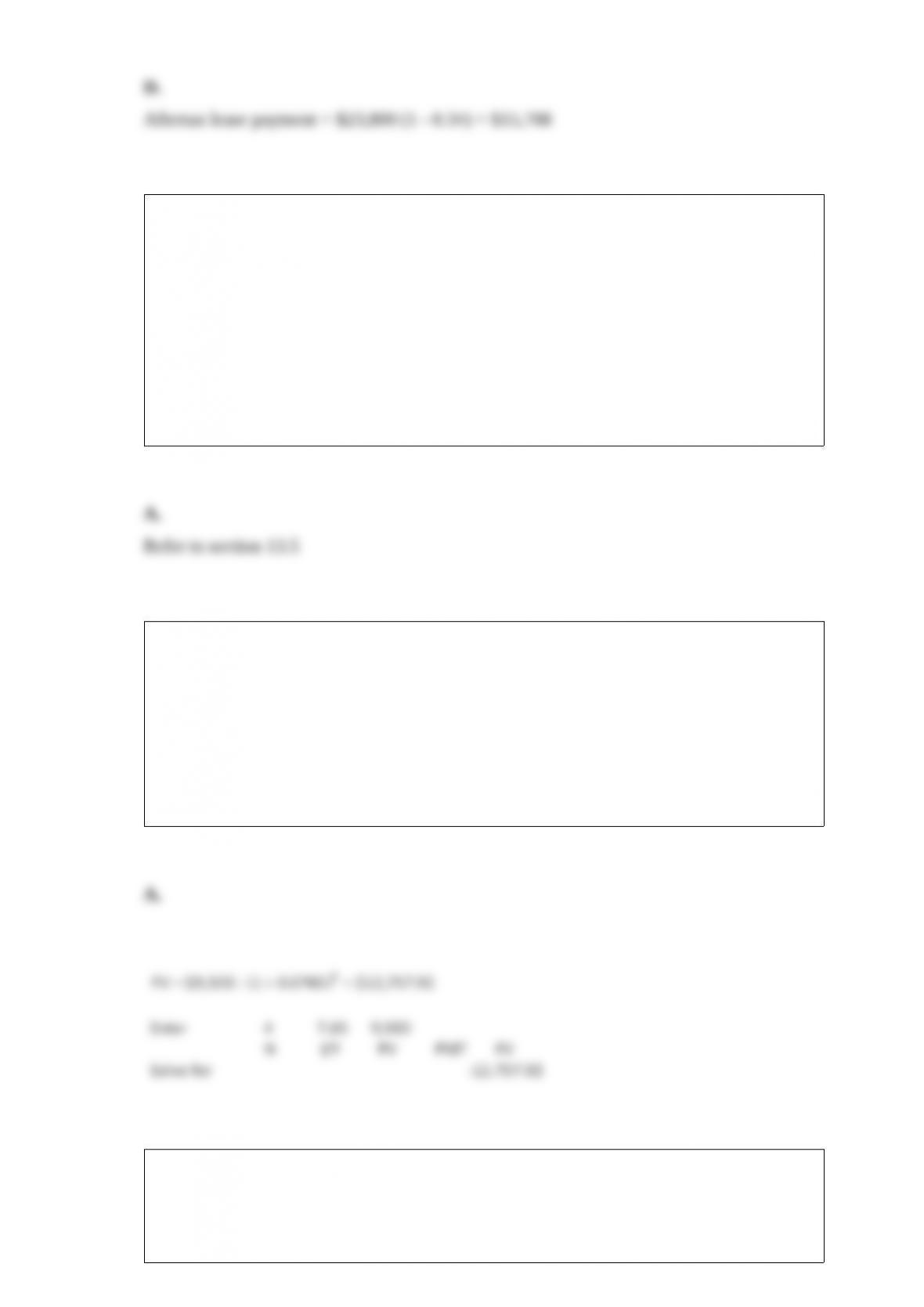 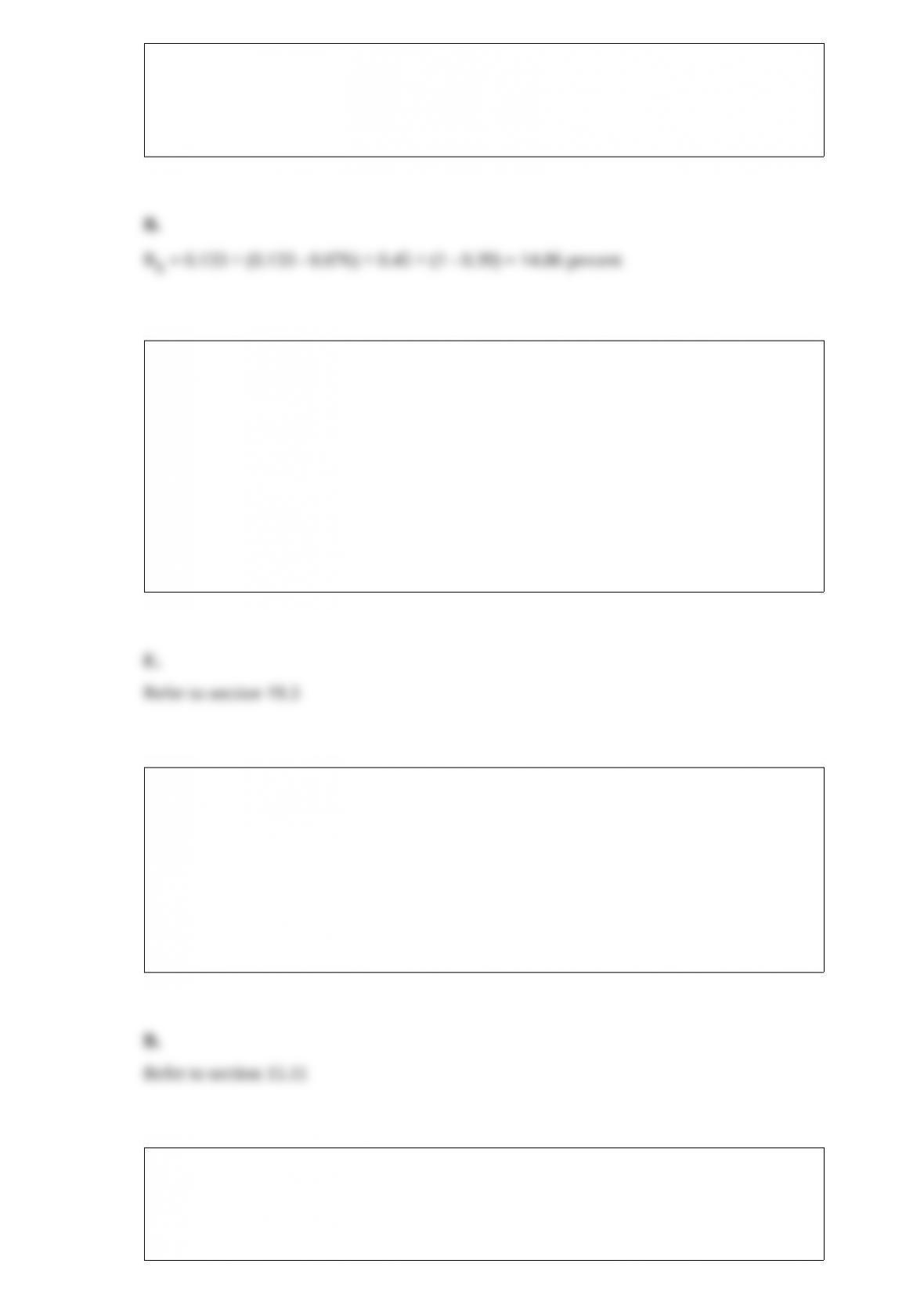 B. 14.86 percent
C. 15.92 percent
D. 18.40 percent
E. 18.87 percent
Which of the following will reduce collection time?
I. billing customers electronically rather than by mail
II. accepting debit cards but not checks as payment for a sale
III. offering cash discounts for early payment
IV. reducing the processing delay by one day
A. I and II only
B. I and III only
C. I, II, and III only
D. II, III, and IV only
E. I, II, III, and IV
Pearson Electric recently registered 250,000 shares of stock under SEC Rule 415. The
firm plans to sell 150,000 shares this year and the remaining 100,000 shares next year.
What type of registration was this?
A. standby registration
B. shelf registration
C. Regulation A registration
D. Regulation Q registration
E. private placement registration
Luis is going to receive $20,000 six years from now. Soo Lee is going to receive
$20,000 nine years from now. Which one of the following statements is correct if both
Luis and Soo Lee apply a 7 percent discount rate to these amounts?
A. The present values of Luis and Soo Lee's monies are equal. 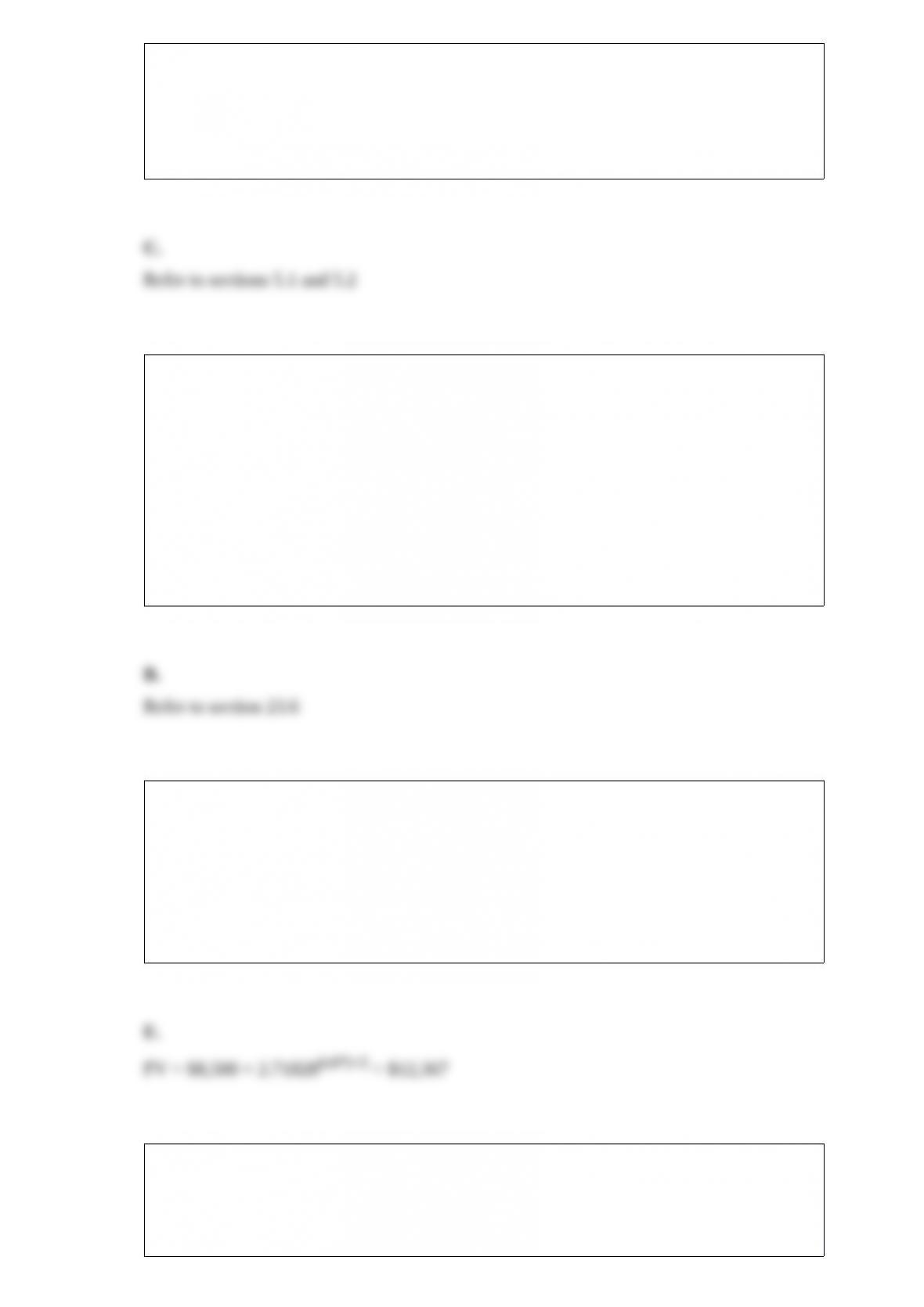 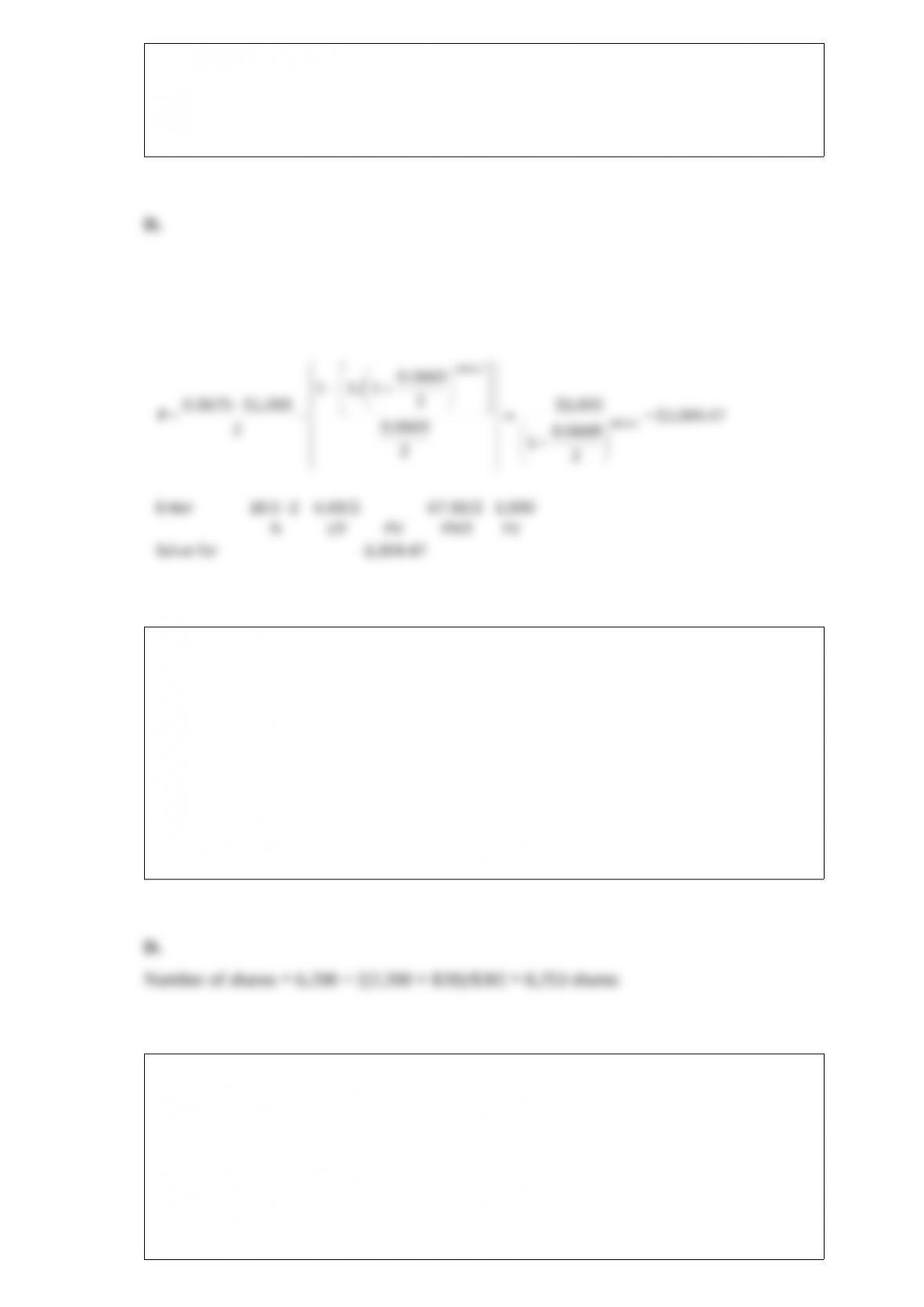 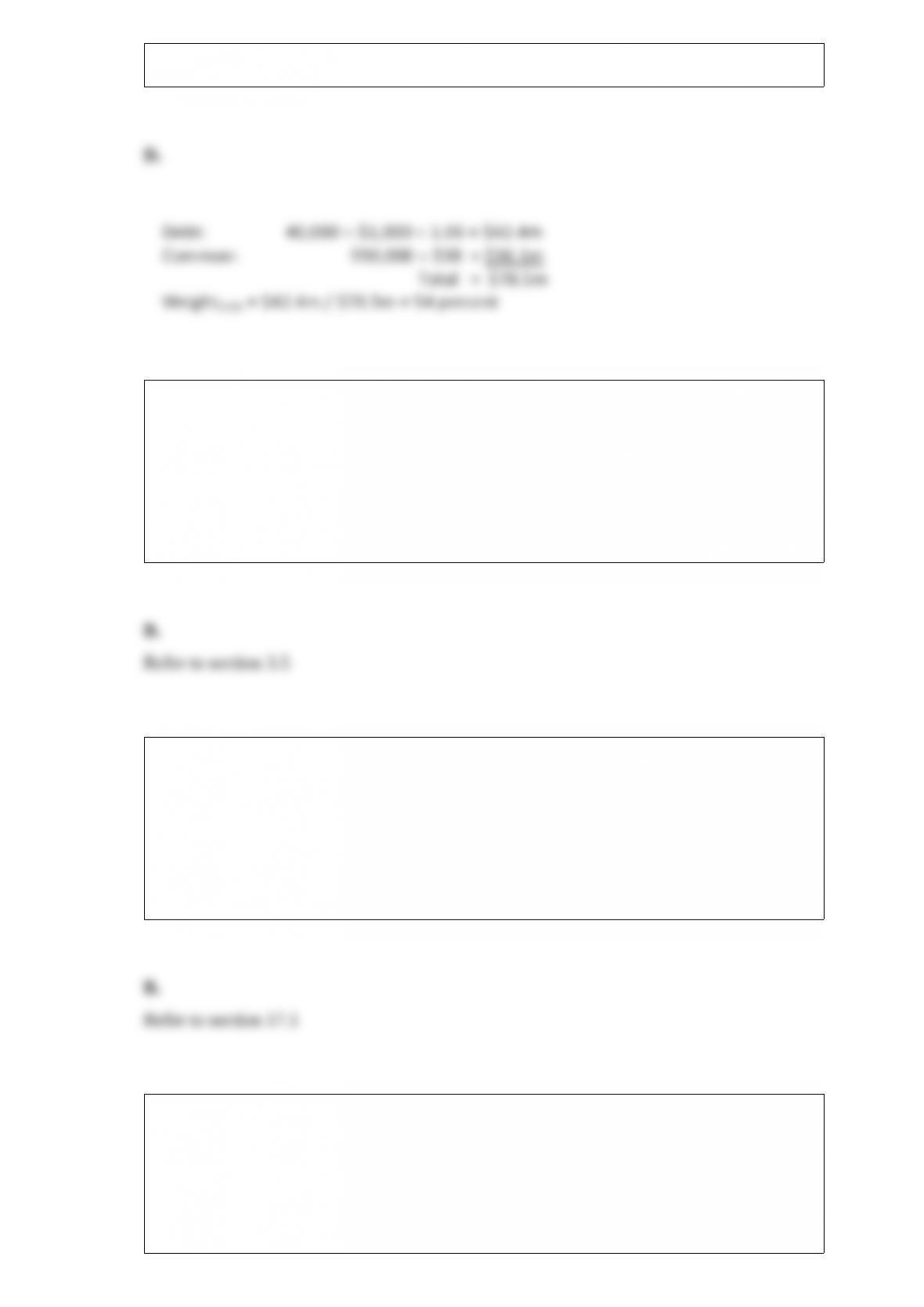 E. 58 percent
Which one of the following statements is correct?
A. Book values should always be given precedence over market values.
B. Financial statements are frequently used as the basis for performance evaluations.
C. Historical information provides no value to someone who is predicting future
performance.
D. Potential lenders place little value on financial statement information.
E. Reviewing financial information over time has very limited value.
Which one of the following statements related to cash dividends is correct?
A. Extra cash dividends cannot be repeated in the future.
B. A dividend is never a liability until it has been declared.
C. If a firm has paid regular quarterly dividends for at least five consecutive years it is
legally obligated to continue doing so.
D. Regular cash dividends reduce paid-in capital.
E. The dividend yield expresses the annual dividend as a percentage of net income.
You want to invest in a project in Canada. The project has an initial cost of C$2.2
million and is expected to produce cash inflows of C$900,000 a year for 3 years. The
project will be worthless after the first 3 years. The expected inflation rate in Canada is
4 percent while it is only 3 percent in the U.S. The applicable interest rate for the
project in Canada is 13 percent. The current spot rate is C$1 = $0.8158. What is the net
present value of this project in Canadian dollars? 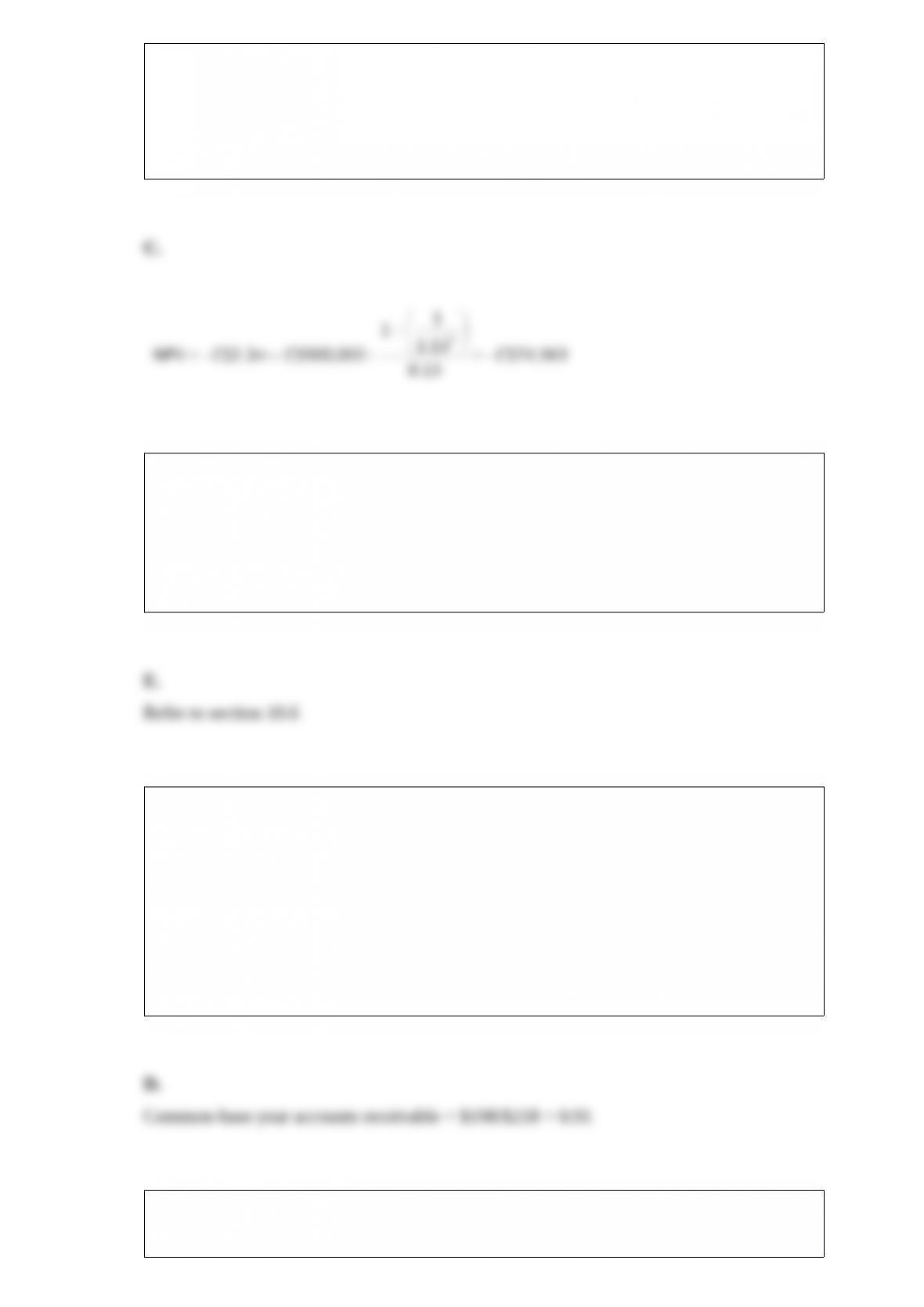 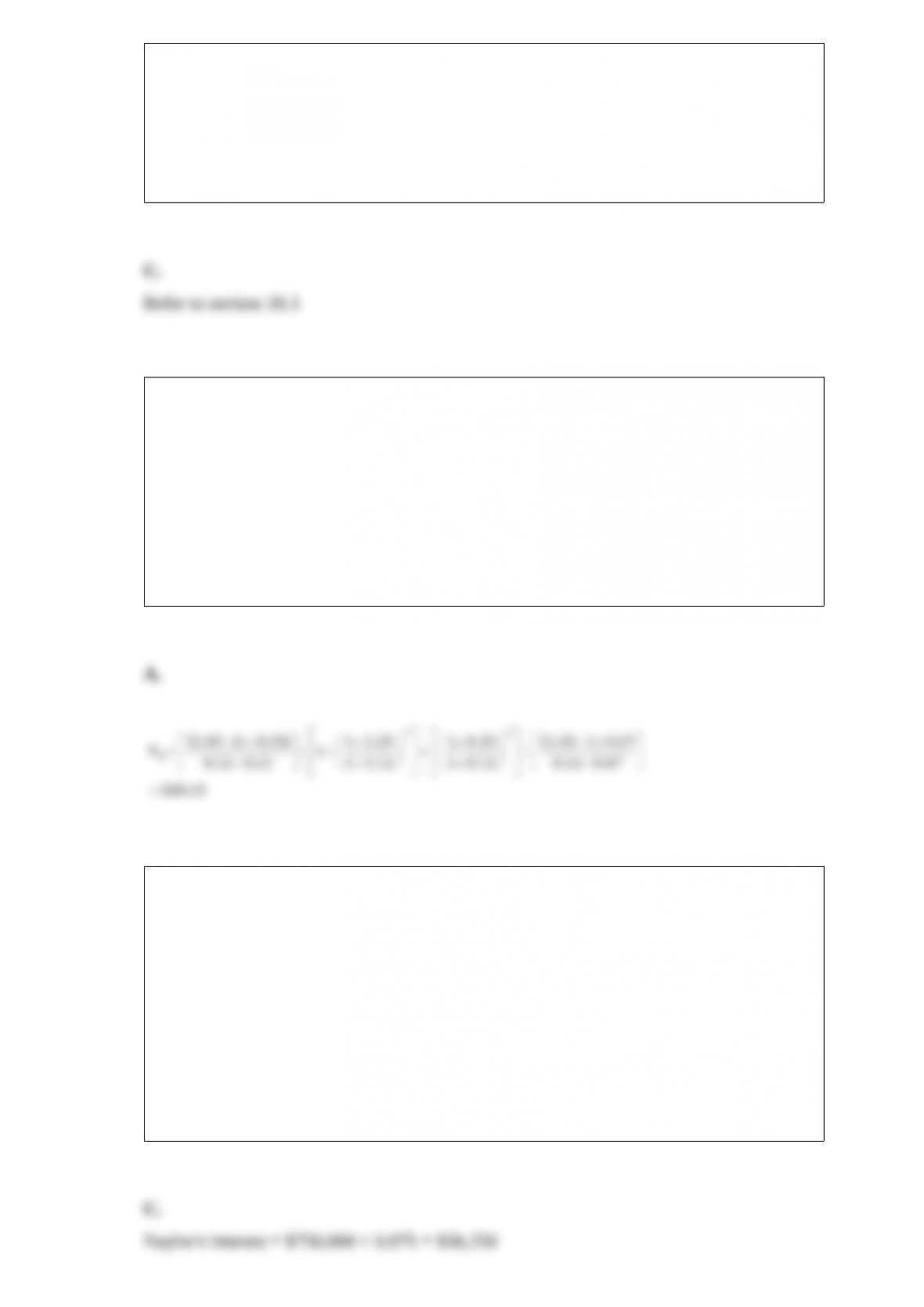 policy.
B. A flexible financing policy tends to increase the risk of encountering financial
distress.
C. Long-term interest rates tend to be less volatile than short-term rates.
D. Most firms tend to finance inventory with long-term debt.
E. Short-term interest rates are generally higher than long-term rates.
Harvey County Choppers, Inc. is experiencing rapid growth. The company expects
dividends to grow at 25 percent per year for the next 7 years before leveling off to 7
percent into perpetuity. The required return on the stock is 12 percent. What is the
current stock price if the annual dividend share that was just paid was $1.05?
A. $60.15
B. $64.36
C. $67.37
D. $72.11
E. $75.19
Naylor's is an all equity firm with 60,000 shares of stock outstanding at a market price
of $50 a share. The company has earnings before interest and taxes of $87,000. Naylor's
has decided to issue $750,000 of debt at 7.5 percent. The debt will be used to
repurchase shares of the outstanding stock. Currently, you own 500 shares of Naylor's
stock. How many shares of Naylor's stock will you continue to own if you unlever this
position? Assume you can loan out funds at 7.5 percent interest. Ignore taxes.
A. 300 shares
B. 350 shares
C. 375 shares
D. 425 shares
E. 500 shares 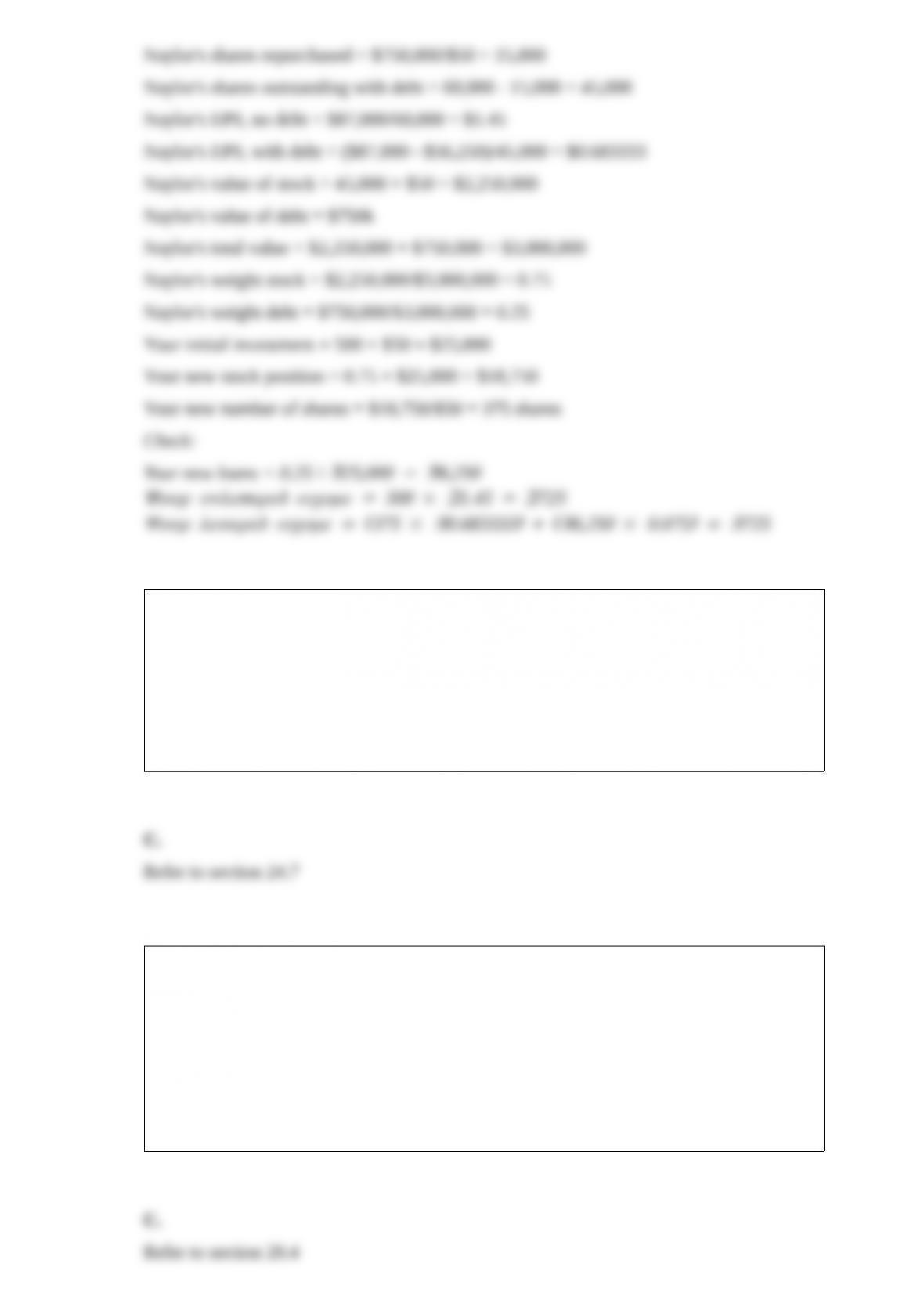 Brad owns a convertible bond. Which one of the following terms would apply to the
value of this bond if he were to convert it into shares of stock today?
A. conversion premium
B. straight bond value
C. conversion value
D. inverted value
E. prescribed value
Assume that RSF is a wholly-owned subsidiary of the Rolled Steel Company. RSF
provides credit financing solely for large ticket items purchased from the Rolled Steel
Company. Which one of the following terms describes RSF?
A. credit department
B. parent company
C. captive finance company
D. credit union
E. service unit 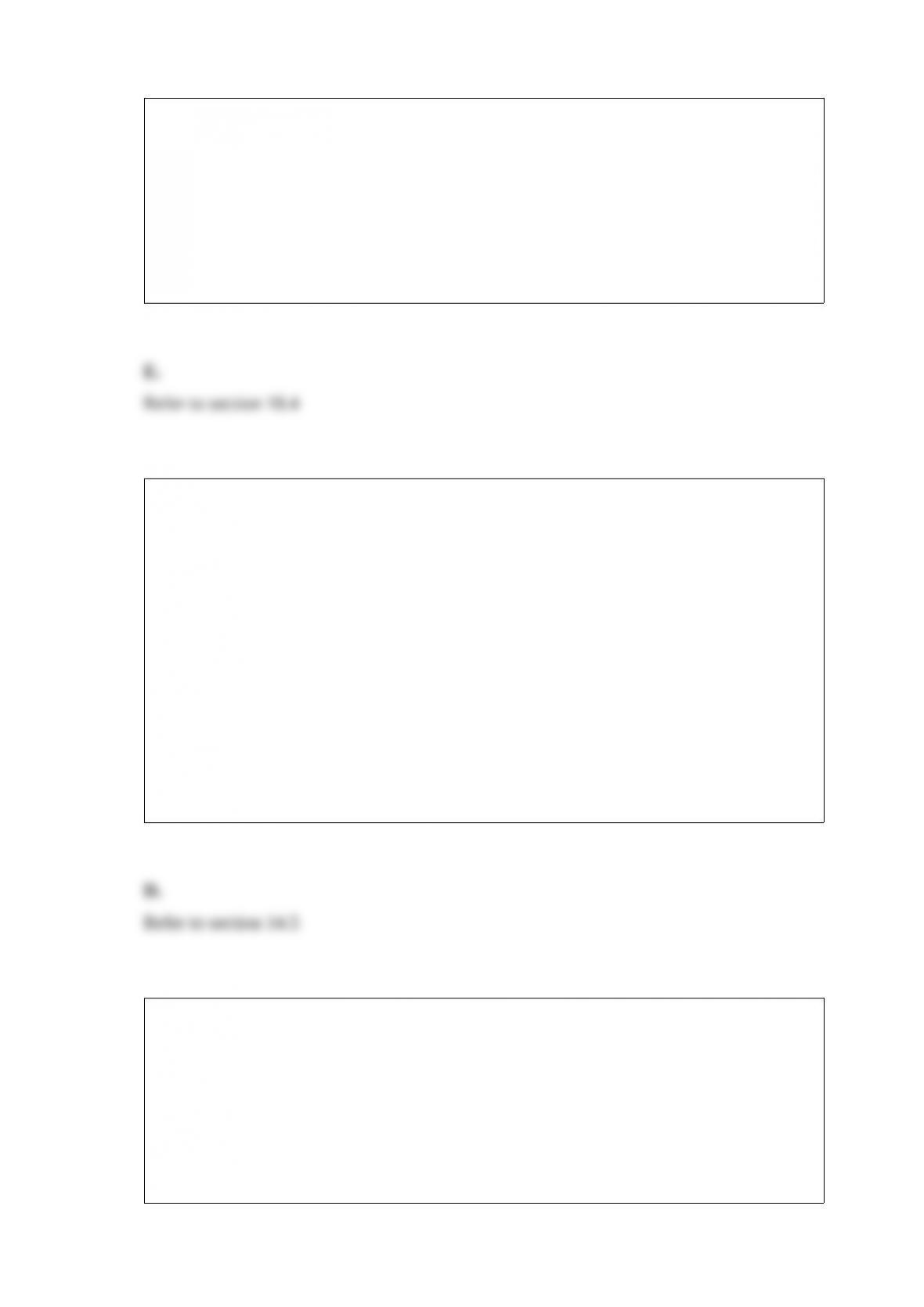 Assume each month has 30 days and a firm has a 60-day accounts receivable period.
During the second calendar quarter of the year, that firm will collect payment for the
sales it made during which of the following months?
A. October, November, and December
B. November, December, and January
C. December, January, and February
D. January, February, and March
E. February, March, and April
Preston Industries has two separate divisions. Each division is in a separate line of
business. Division A is the largest division and represents 70 percent of the firm's
overall sales. Division A is also the riskier of the two divisions. Division B is the
smaller and least risky of the two. When management is deciding which of the various
divisional projects should be accepted, the managers should:
A. allocate more funds to Division A since it is the largest of the two divisions.
B. fund all of Division B's projects first since they tend to be less risky and then allocate
the remaining funds to the Division A projects that have the highest net present values.
C. allocate the company's funds to the projects with the highest net present values based
on the firm's weighted average cost of capital.
D. assign appropriate, but differing, discount rates to each project and then select the
projects with the highest net present values.
E. fund the highest net present value projects from each division based on an allocation
of 70 percent of the funds to Division A and 30 percent of the funds to Division B.
A stock has annual returns of 13 percent, 21 percent, -12 percent, 7 percent, and -6
percent for the past five years. The arithmetic average of these returns is _____ percent
while the geometric average return for the period is _____ percent.
A. 3.89; 3.62
B. 3.89; 4.60
C. 3.62; 3.89
D. 4.60; 3.62
E. 4.60; 3.89 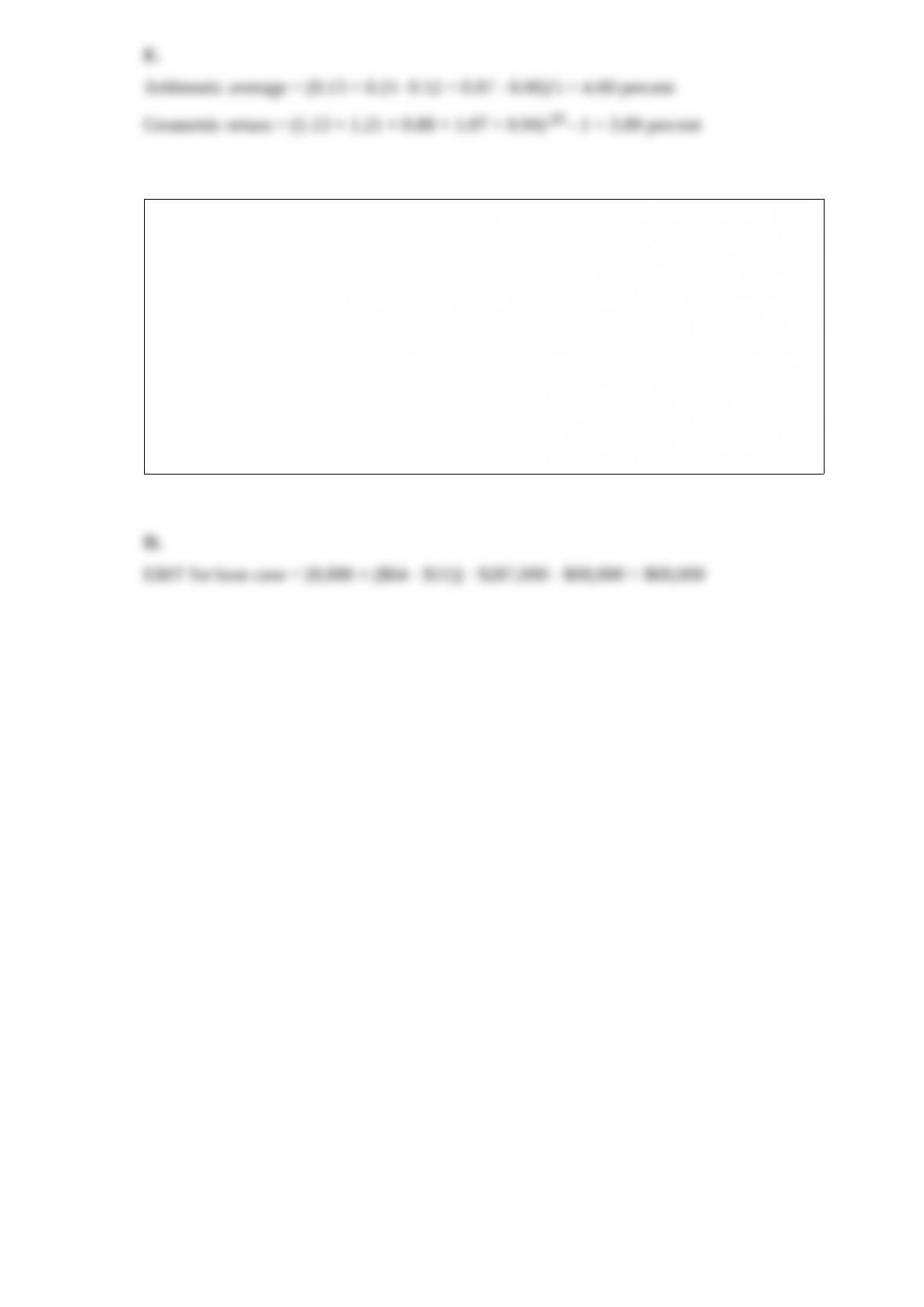