Tom remained an active and vital force within his family until he could no longer carry
out that role. Tom's illness was viewed as a crisis that united family members in
caregiving. Tom is most likely a(n)
A) African American.
B) Native American.
C) Buddhist.
D) member of the Maori tribe.
In families with 5 to 10 siblings,
A) intimacy is more important than commitment.
B) sibling bonds are usually weaker in adulthood.
C) loneliness is common even among the married siblings.
D) close sibling bonds may replace friendships.
Gayle has had a few dates with Joine. Early __________ love is a strong predictor of
whether they will keep dating.
A) committed
B) intimate
C) passionate 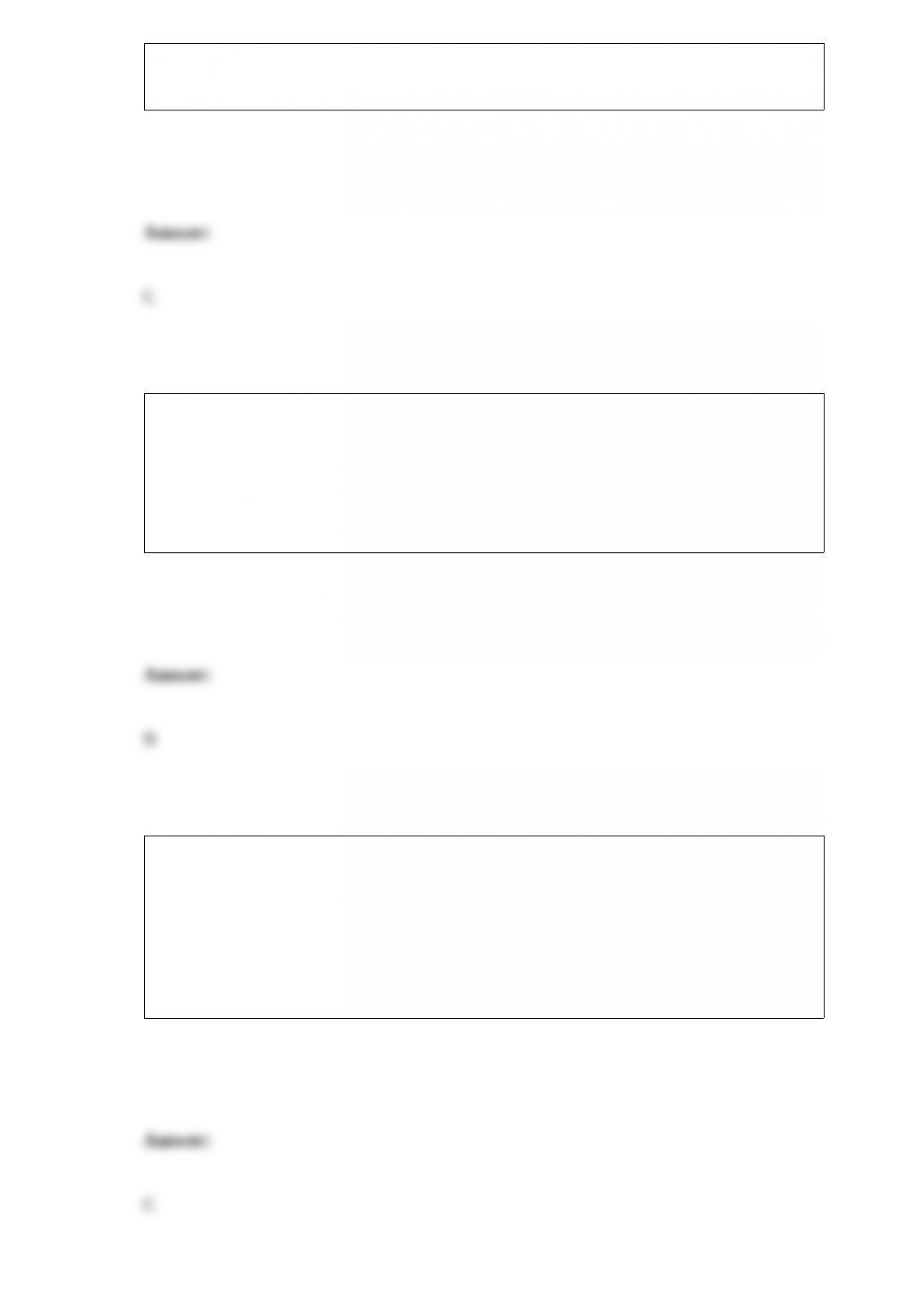 D) companionate
By middle adulthood, thinking is characterized by an increase in
A) processing speed.
B) specialization.
C) self-expression.
D) emotional intensity.
Which of the following statements about people who flexibly modify their identities in
response to age-related changes yet maintain a sense of self-continuity is true?
A) Their personalities undergo drastic revision.
B) They enter an extended period of moratorium.
C) They score higher in self-esteem.
D) They score lower in self-esteem. 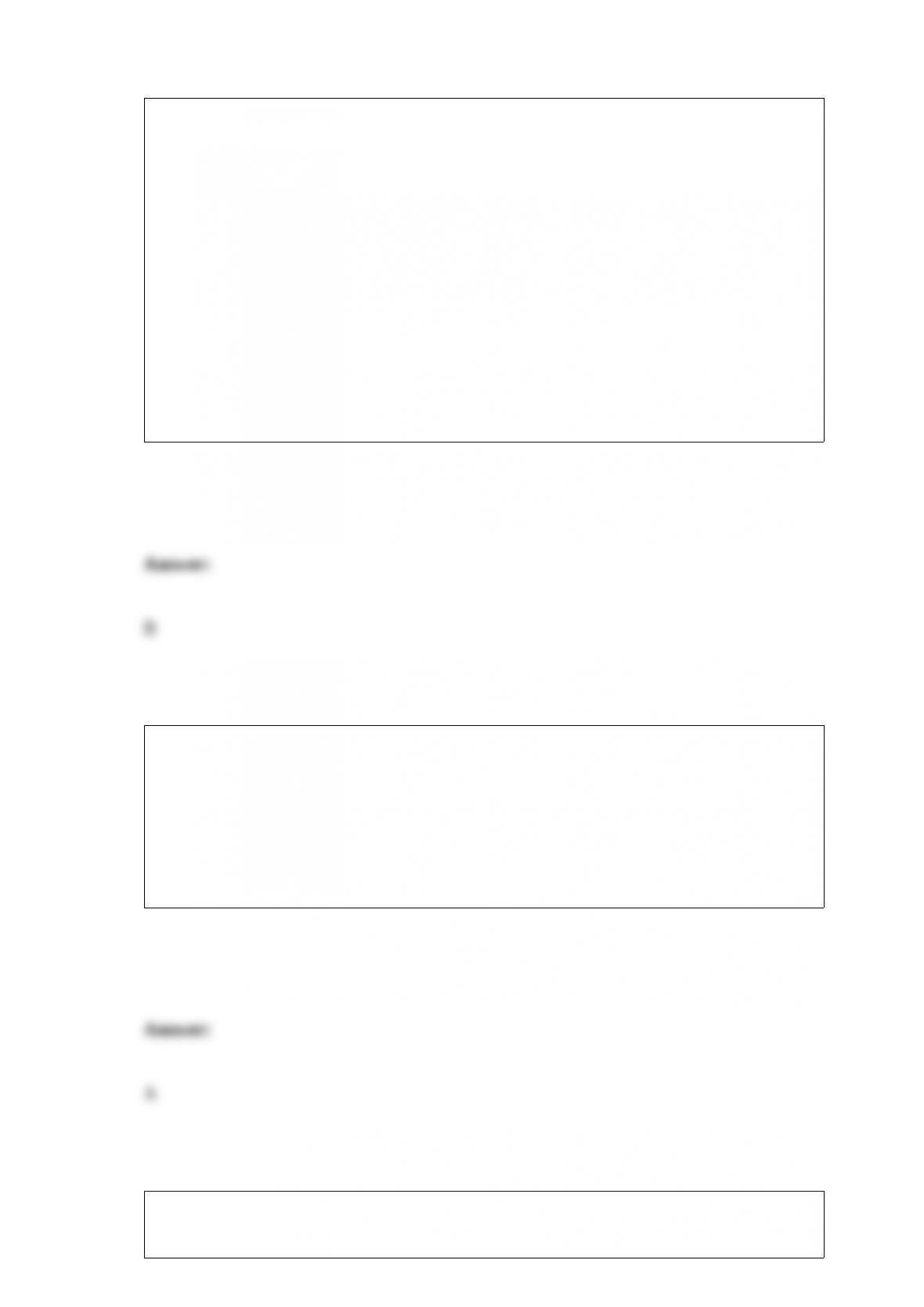 Which of the following statements about the role of psychoanalytic theory in modern
human development research is true?
A) Psychosexual theory, which emphasizes how parents manage their child's sexual and
aggressive drives in the first few years, is a mainstream of current research.
B) One of the lasting contributions of psychoanalytic theory is its ability to capture the
essence of personality during each period of development.
C) Psychoanalytic theorists' emphasis on the importance of experiences beyond infancy
and early childhood is still largely accepted.
D) Psychoanalytic theory has cross-cultural implications because researchers have
studied individuals from all over the world.
Throughout adolescence, __________ is the single most consistent predictor of mental
health.
A) the quality of the parent"child relationship
B) academic achievement
C) clique membership
D) moral development
By using __________ assignment of participants to treatment conditions, investigators 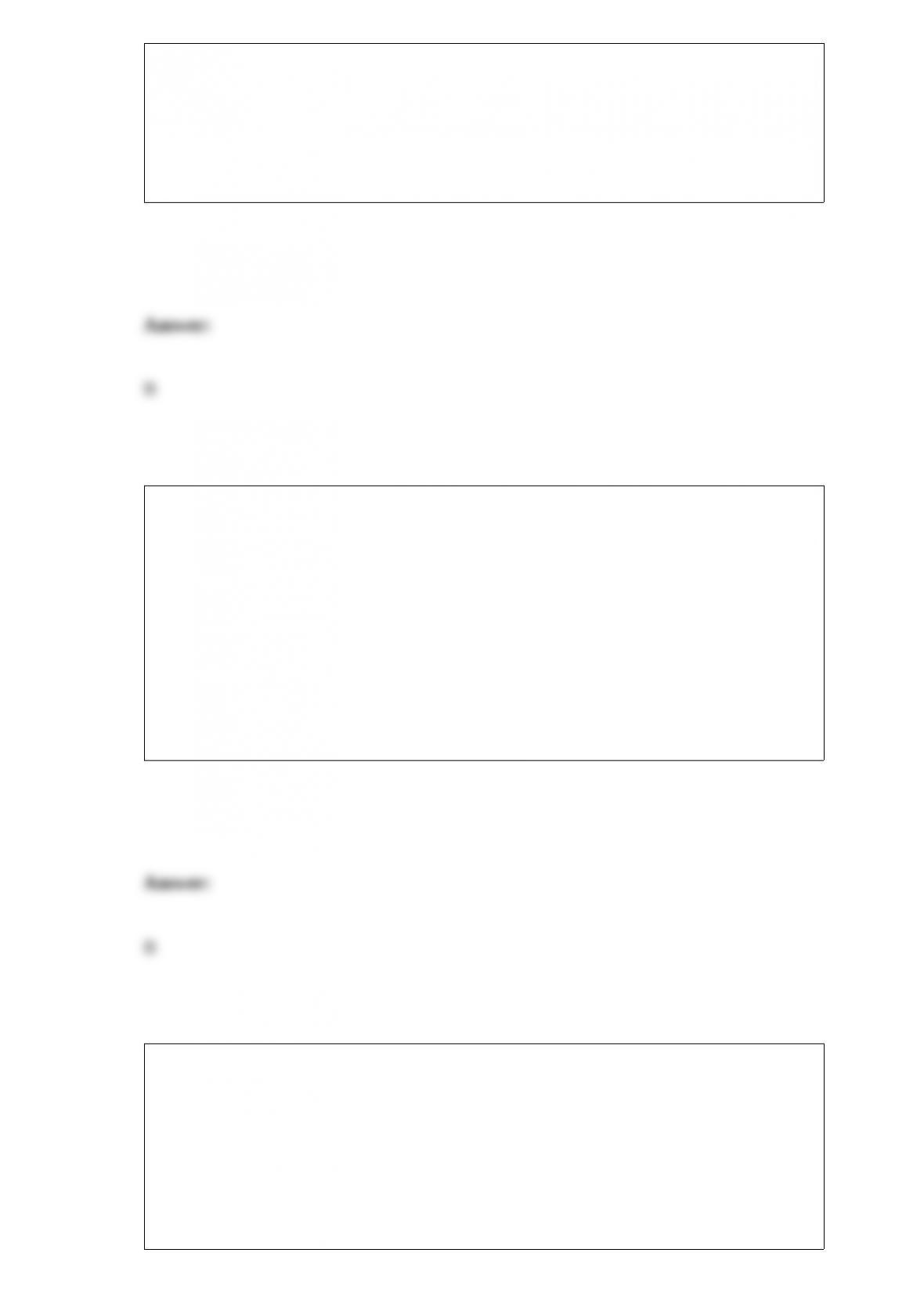 increase the chances that participants' characteristics will be equally distributed across
treatment groups.
A) sequential
B) random
C) systematic
D) correlational
When Baby Jaleel was born, stimulation in his brain resulted in a massive
overabundance of synapses. Neurons that were seldom stimulated began to lose their
synapses. This process is known as
A) myelination.
B) synaptic pruning.
C) neuroimaging.
D) neurotransmission.
In Jody's preschool classroom, teachers introduce activities that build on children's
current thinking, challenging their incorrect ways of viewing the world. But they do not
try to hasten development by imposing new skills before children indicate interest or
readiness. This preschool emphasizes the Piagetian principle of
A) sensitivity to children's readiness to learn.
B) acceptance of individual differences. 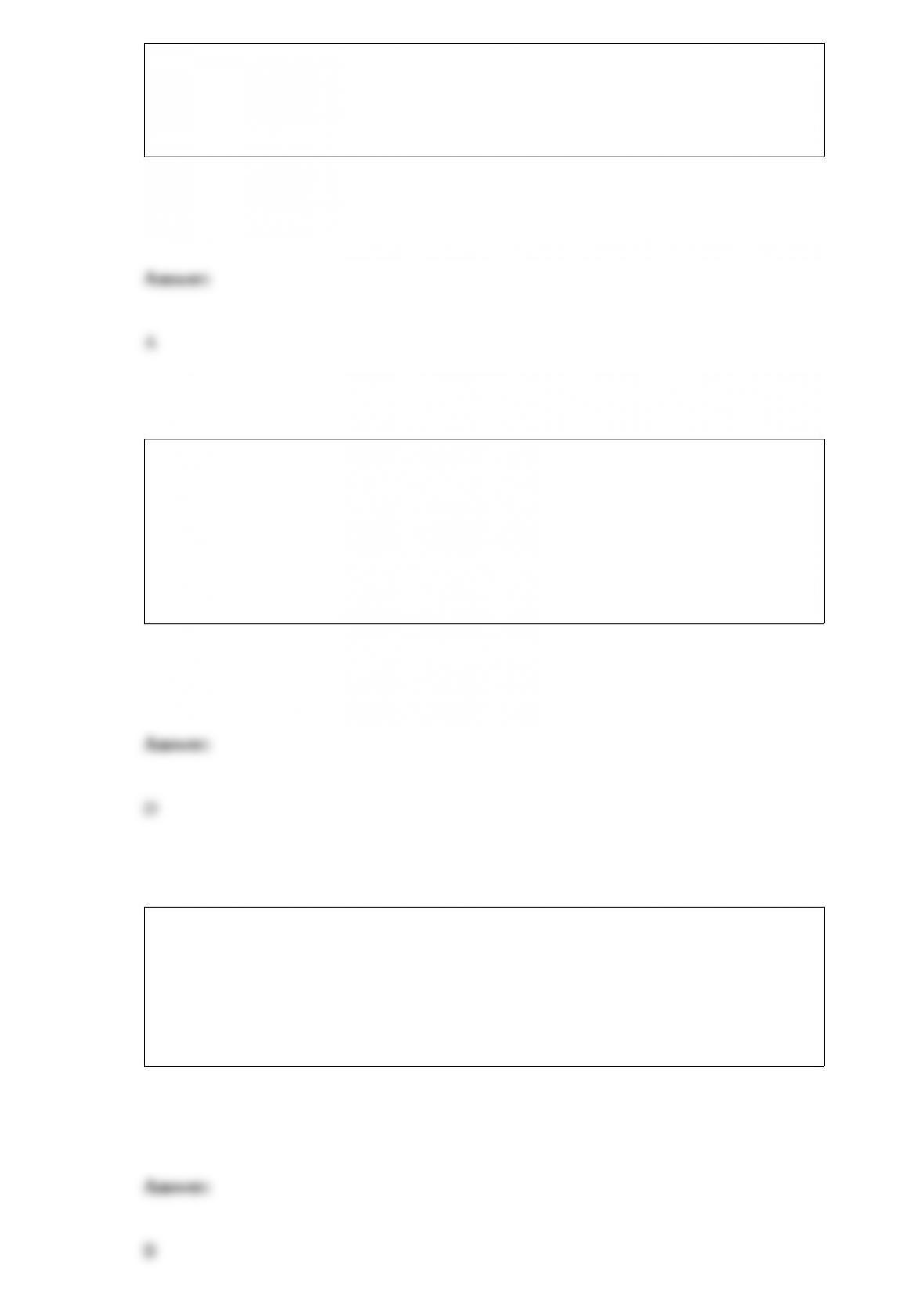 C) discovery learning.
D) scaffolding.
Ten-year-old Nadia enjoys making up games and playing them with her friends.
Playing these child-invented games probably allows Nadia to
A) play without rules and increase her popularity.
B) compete against her friends and establish a dominance hierarchy.
C) develop challenging gross- and fine-motor skills.
D) try out different styles of cooperating and competing with little personal risk.
On tests of complex abilities, the slower the reaction time, the
A) higher the score on tests of memory.
B) lower the score on problem-solving tasks.
C) higher the score on tests of reasoning
D) greater the relationship for crystallized- than fluid-ability items. 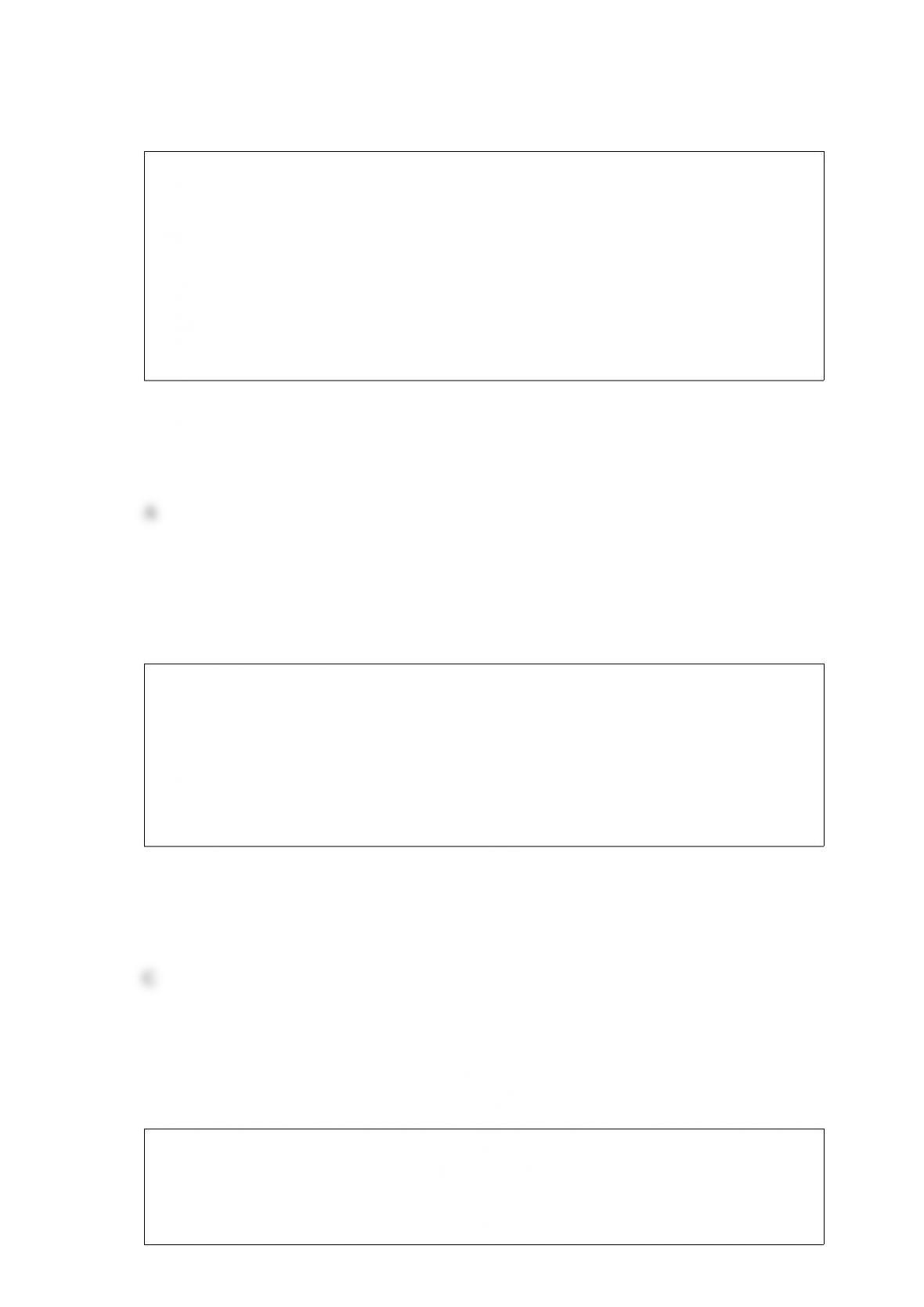 Which age group is likely to do more niche-picking?
A) adolescents
B) preschoolers
C) infants
D) toddlers
Three month old Jefferson will probably listen longer to __________ than to
__________.
A) pure tones; voices
B) pure tones; noises
C) human speech; nonspeech sounds
D) a foreign language; his native language
Paul is concerned because his 6-year-old son prints using large letters and numbers.
You can tell Paul that his son's writing is large because he
A) cannot yet visually distinguish fine details. 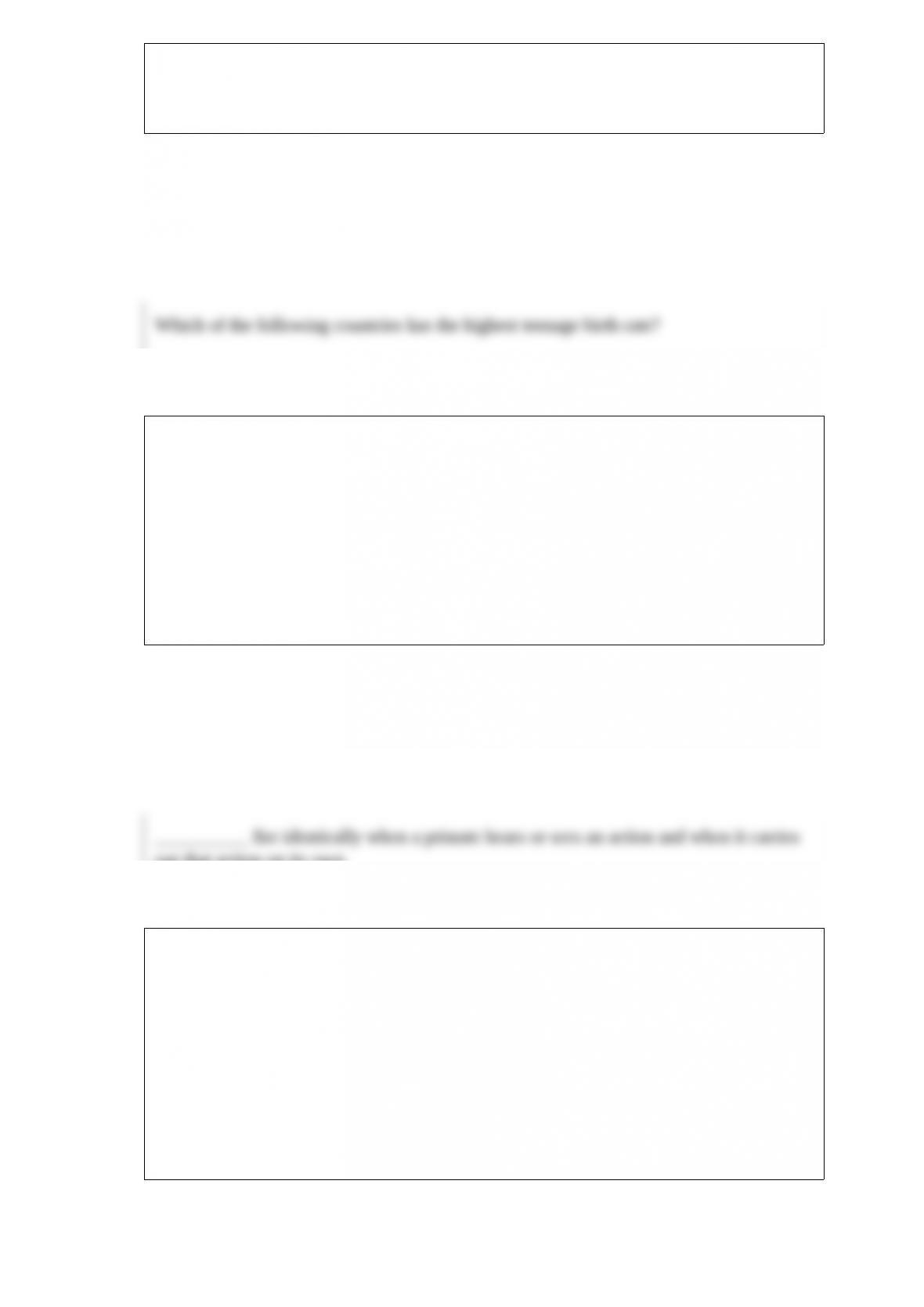 B) has not yet developed adequate depth perception.
C) makes strokes with his entire arm rather than just the wrist and fingers.
D) can only use his wrist and fingers to form the letters and numbers.
Which of the following countries has the highest teenage birth rate?
A) United States
B) Slovakia
C) Czech Republic
D) Poland
__________ fire identically when a primate hears or sees an action and when it carries
out that action on its own.
A) Imitation neurons
B) Glial cells
C) Mirror neurons
D) Neurotransmitters 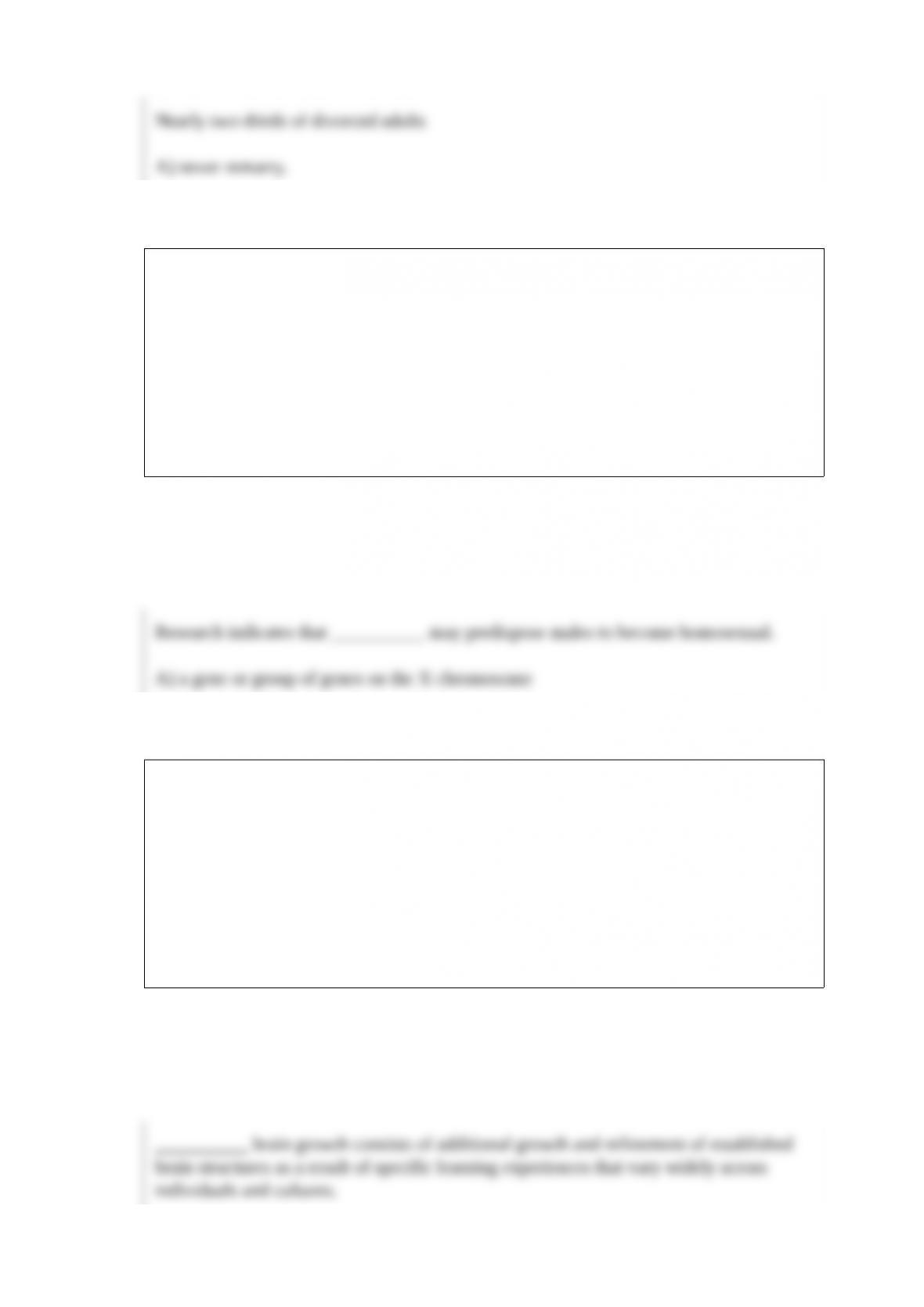 Nearly two-thirds of divorced adults
A) never remarry.
B) never have children.
C) remarry.
D) will divorce at least twice.
Research indicates that __________ may predispose males to become homosexual.
A) a gene or group of genes on the X chromosome
B) overly strict parenting during the early years
C) excessive contact with homosexual adults
D) chemical pollutants found in the atmosphere 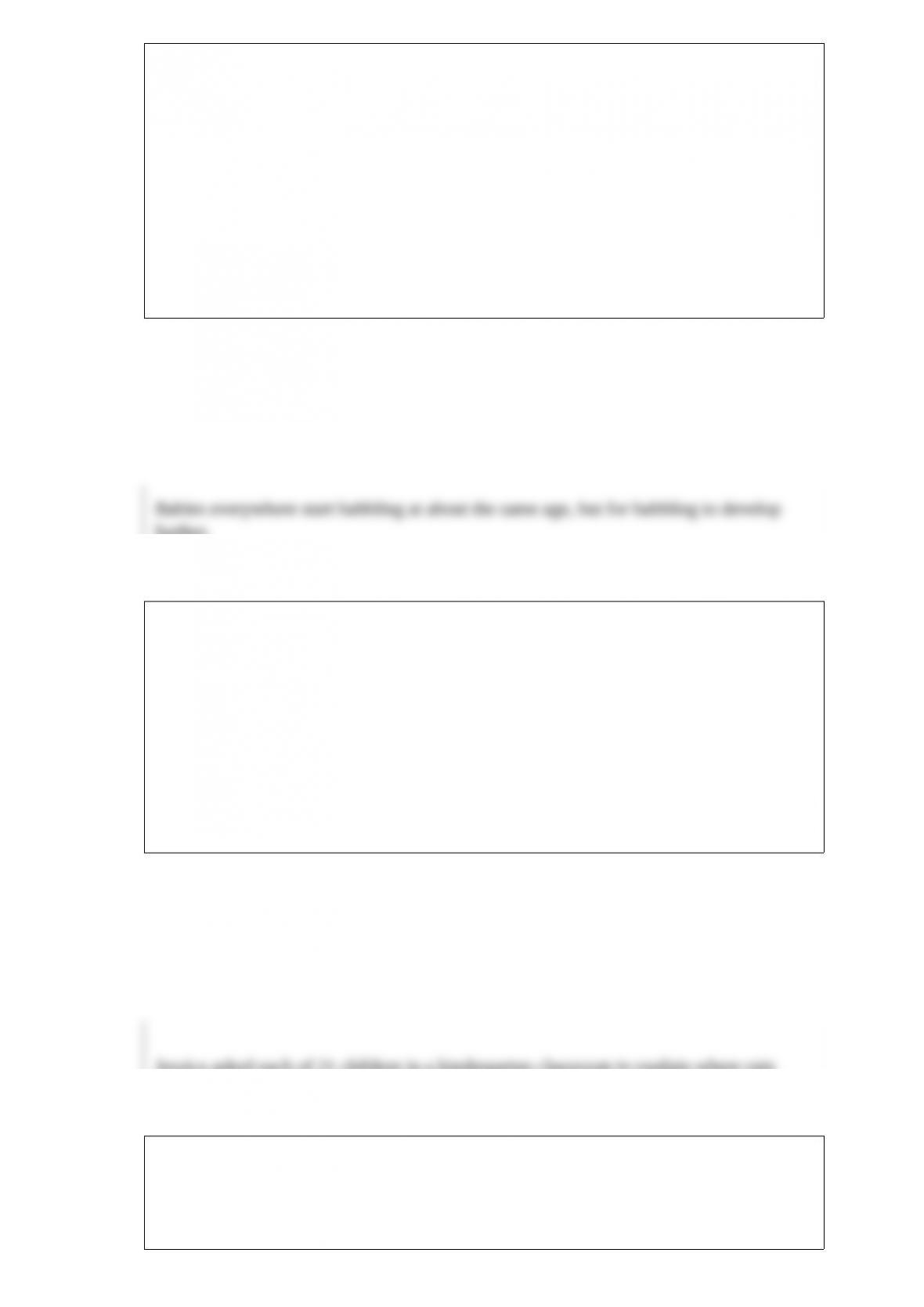 __________ brain growth consists of additional growth and refinement of established
brain structures as a result of specific learning experiences that vary widely across
individuals and cultures.
A) Early-dependent
B) Experience-expectant
C) Experience-dependent
D) Early-expectant
Babies everywhere start babbling at about the same age, but for babbling to develop
further,
A) babies must be able to produce intonation patterns.
B) the speech must be in the babies' native language.
C) it needs to be paired with rudimentary sign language.
D) babies must be able to hear human speech.
Jessica asked each of 21 children in a kindergarten classroom to explain where rain
comes from. She asked the same set of follow-up questions to each participant. This is
an example of a 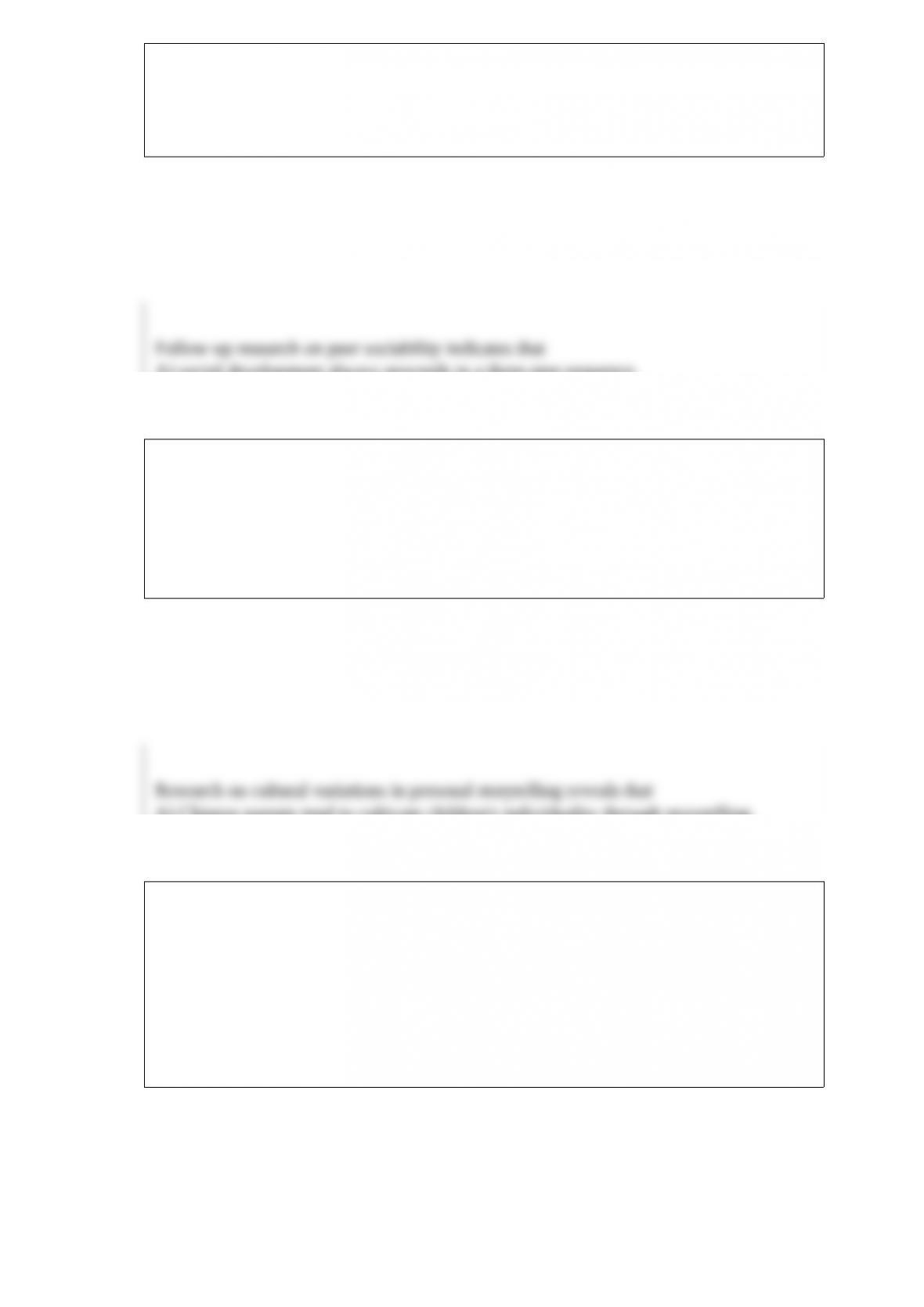 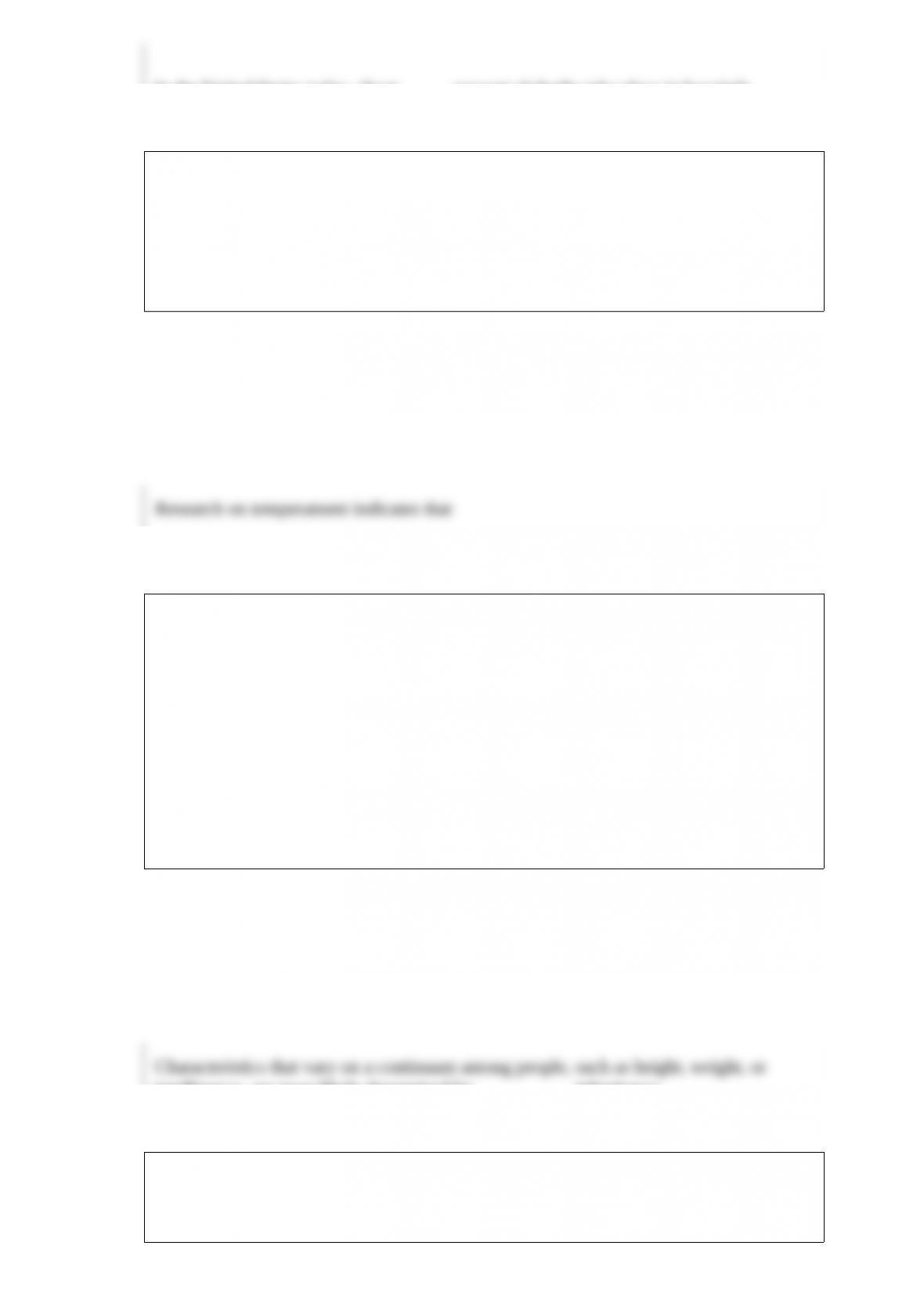 In the United States today, about _____ percent of deaths take place in hospitals.
A) 30
B) 40
C) 50
D) 60
Research on temperament indicates that
A) the ease with which children manage their reactivity in early childhood depends on
the type and strength of the reactive emotion involved.
B) only 5 to 10 percent of individual differences in temperament are due to heredity.
C) preschoolers who were highly fearful as toddlers score slightly lower than their
agemates in effortful control.
D) boys and girls tend to be equally active and daring throughout childhood.
Characteristics that vary on a continuum among people, such as height, weight, or
intelligence, are most likely determined by __________ inheritance. 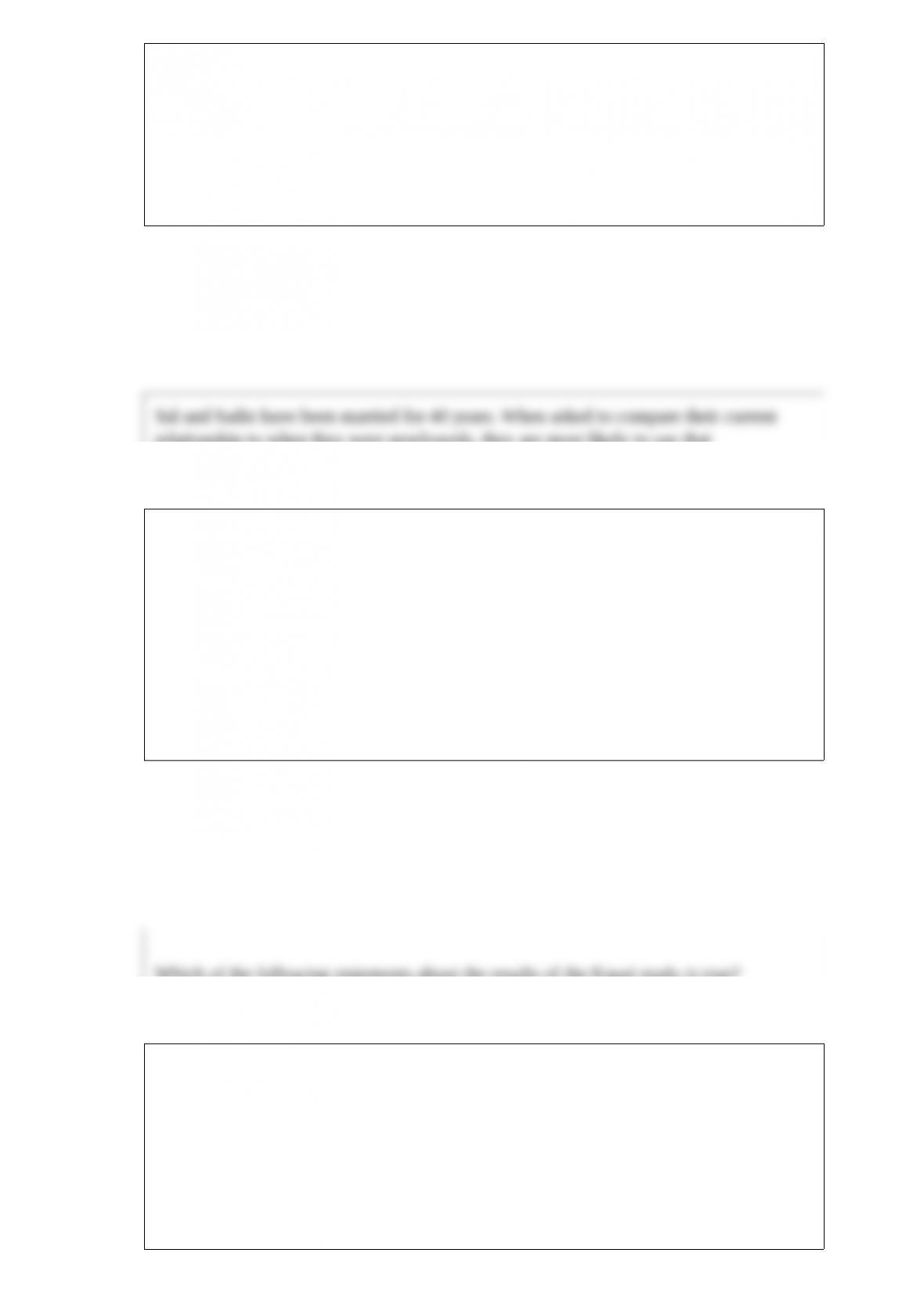 A) X-linked
B) polygenic
C) dominant"recessive
D) paternal
Sal and Sadie have been married for 40 years. When asked to compare their current
relationship to when they were newlyweds, they are most likely to say that
A) their marriage has more passionate love now than earlier.
B) they love each other more now than they did earlier.
C) their marriage has more conflict now than it did earlier.
D) they have become more like intimate friends than romantic partners.
Which of the following statements about the results of the Kauai study is true?
A) Children born with serious birth complications will not grow into competent,
well-adjusted adults unless they have supportive home environments.
B) Even when the overall balance of life events tips toward the favorable side, children
with serious birth problems rarely develop successfully.
C) The impact of early biological risks often wanes as children's personal
characteristics and social experiences contribute increasingly to their functioning. 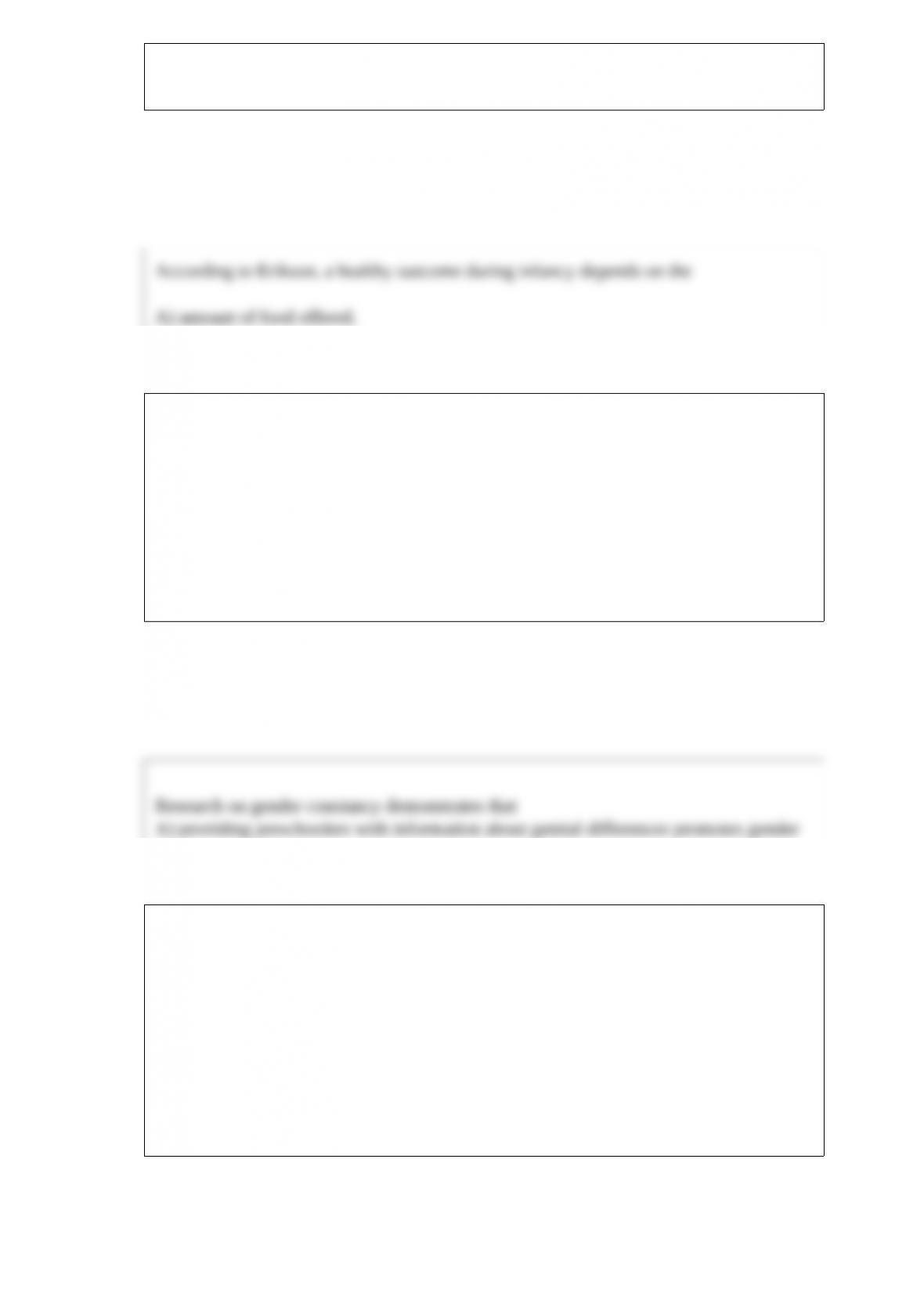 D) Children born with birth complications often develop severe behavioral problems
regardless of their home environment.
According to Erikson, a healthy outcome during infancy depends on the
A) amount of food offered.
B) amount of oral stimulation offered.
C) channeling of biological drives.
D) quality of caregiving.
Research on gender constancy demonstrates that
A) providing preschoolers with information about genital differences promotes gender
constancy.
B) genetic factors have a greater impact on gender constancy than environmental
factors.
C) attainment of gender constancy is strongly related to false-belief understanding and
emotional self-regulation.
D) attainment of gender constancy is strongly related to the ability to pass verbal
appearance"reality tasks. 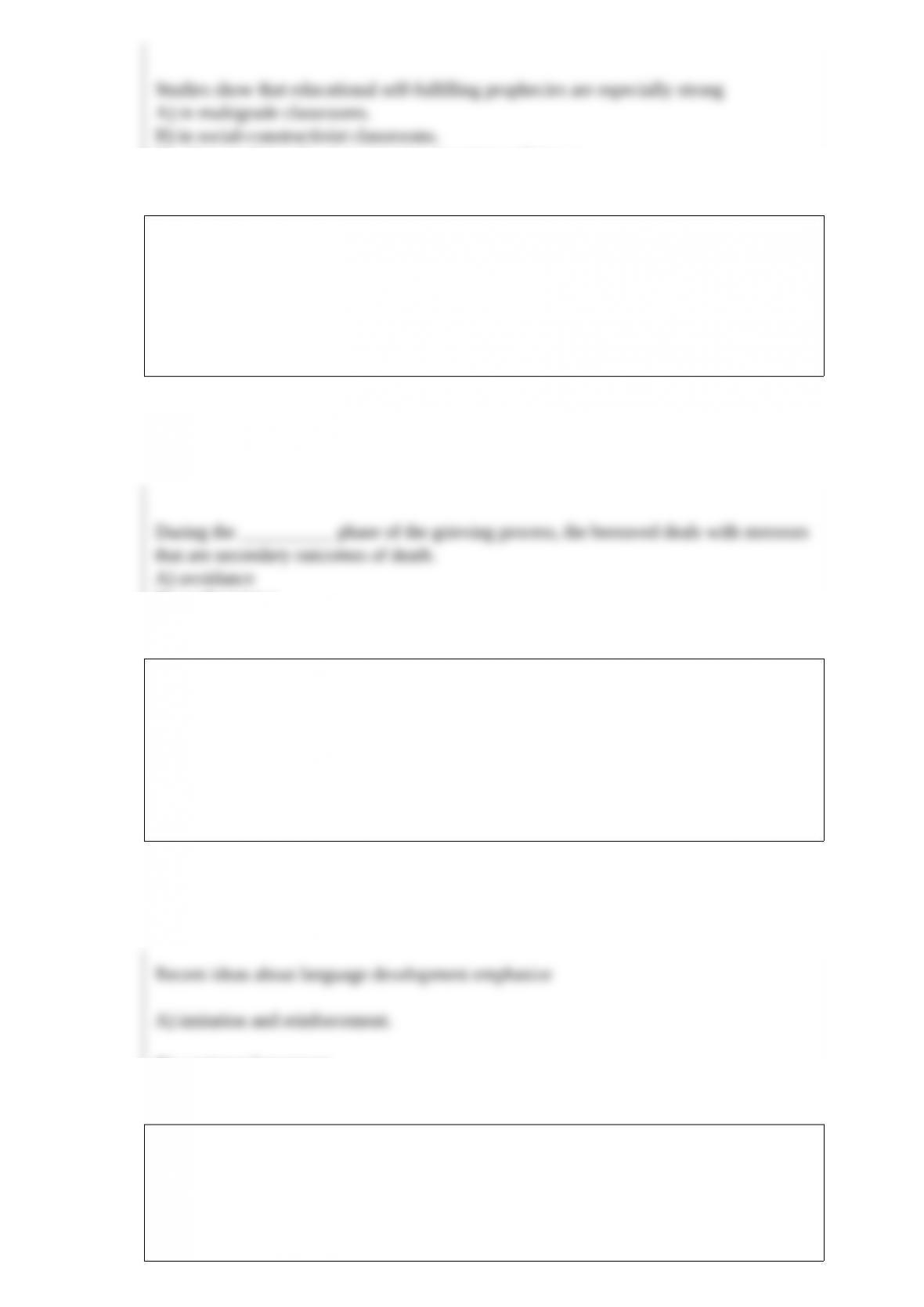 Studies show that educational self-fulfilling prophecies are especially strong
A) in multigrade classrooms.
B) in social-constructivist classrooms.
C) when teachers rely on cooperative learning techniques.
D) when teachers emphasize competition and publicly compare children.
During the __________ phase of the grieving process, the bereaved deals with stressors
that are secondary outcomes of death.
A) avoidance
B) confrontation
C) restoration
D) mourning
Recent ideas about language development emphasize
A) imitation and reinforcement.
B) a universal grammar. 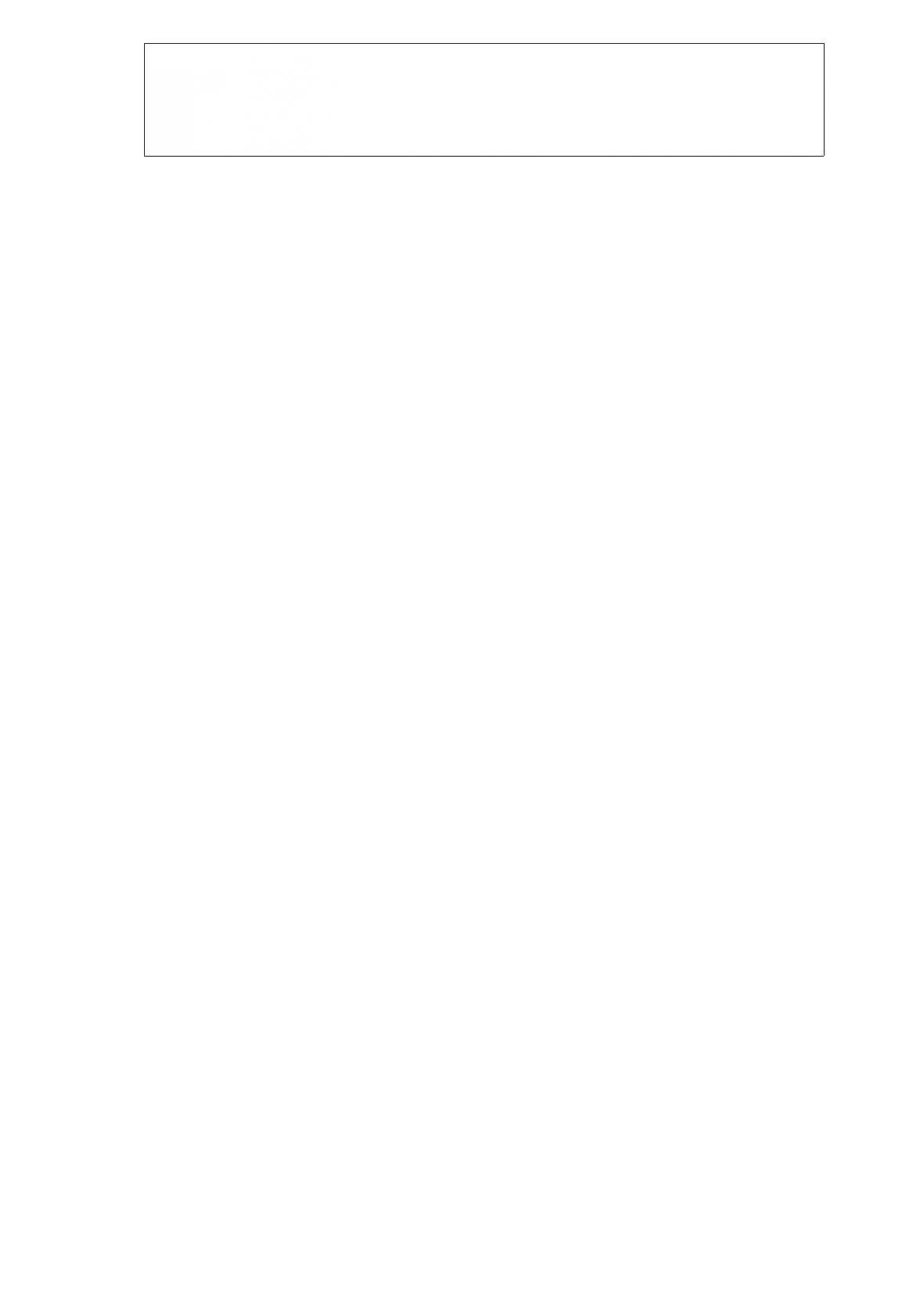