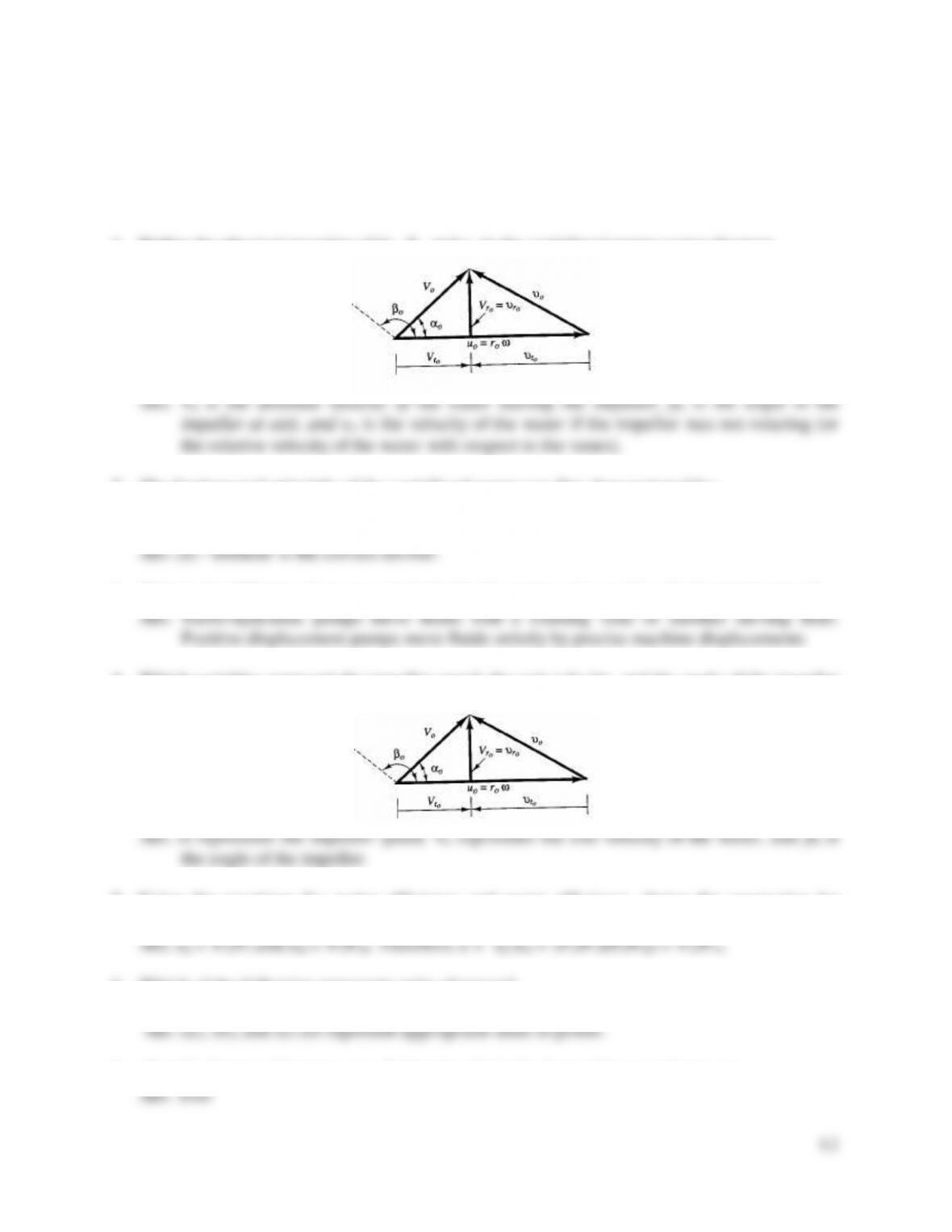 42
TEST QUESTIONS & PROBLEMS - CHAPTER #5
Short Answer Questions
1. Define the physical meaning of Vo, βo, and υo in the centrifugal pump vector diagram.
2. The fundamental principle of the centrifugal pump was first demonstrated by:
a) Manning b) Chezy c) Darcy-Weisbach
d) Hazen-Williams e) Demour f) Wojak-Vieck
3. What is the difference between a turbo hydraulic pump and a positive displacement pump?
4. Which variables represent the impeller speed, the exit velocity, and the angle of the impeller
in the vector diagram below?
5. Using the equations for motor efficiency and pump efficiency, derive the expression for
overall efficiency of a pump system (sometimes called the wire to water efficiency).
6. Which of the following represents units of power?
a) work/time b) hp (horsepower) c) kW (kilowatts) d) dynes
7. (T or F) Pumps add energy to a fluid primarily in the form of increased pressure. 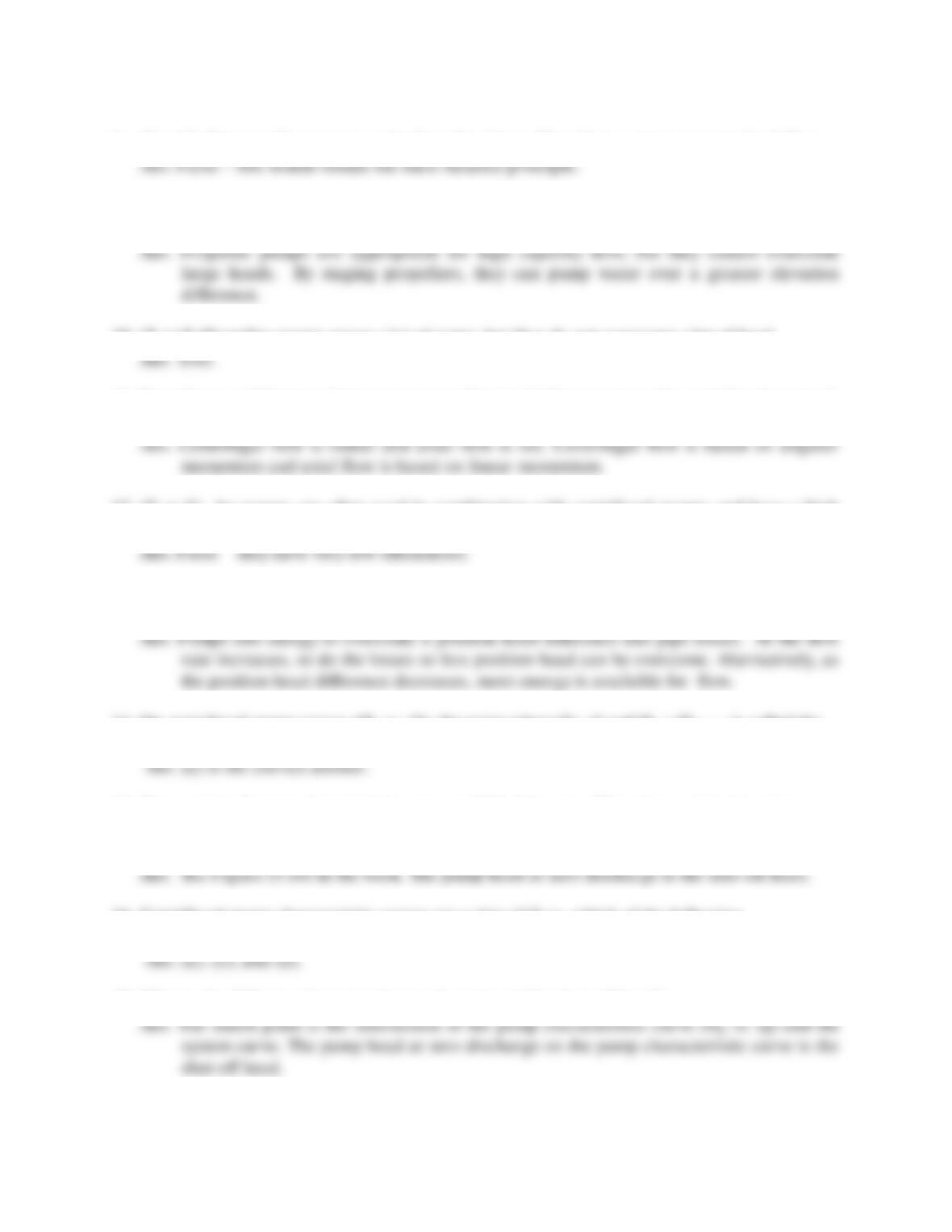 8. (T or F) Pumps add energy to a pipeline; thus the outflow from a pump exceeds the inflow.
9. Propeller blades may be mounted on the same axis of rotation in a common housing to form
a multistage propeller pump. What is the advantage of this configuration?
10. (T or F) Propeller pumps move a lot of water, but they do not overcome a lot of head.
11. Describe two differences between an propeller (axial-flow) pump and a centrifugal pump. Is
the theory of both based on the principle of impulse-momentum?
12. (T or F) Jet pumps are often used in combination with centrifugal pumps and have a high
efficiency.
13. Centrifugal pump curves (Hp vs. Q) start at a high head, low flow rate and trend downward
with increasing flow. What is the reason for this?
14. On centrifugal pump curves (Hp vs. Q), the point where Q = 0 and Hp = Hp(max) is called the
a) shut-off head b) rated capacity c) brake horsepower d) match point e) no idea!!
15. Draw a typical pump characteristic curve and label the axes. Then draw a typical system
curve on the same graph. Label the match point and the shut-off head. Now draw a
typical efficiency curve on the same graph.
16. Centrifugal pump characteristic curves are a plot of Q vs. which of the following
a) pump head b) rated capacity c) brake horsepower d) efficiency e) friction loss
17. What is the difference between the match point and the shut-off head? 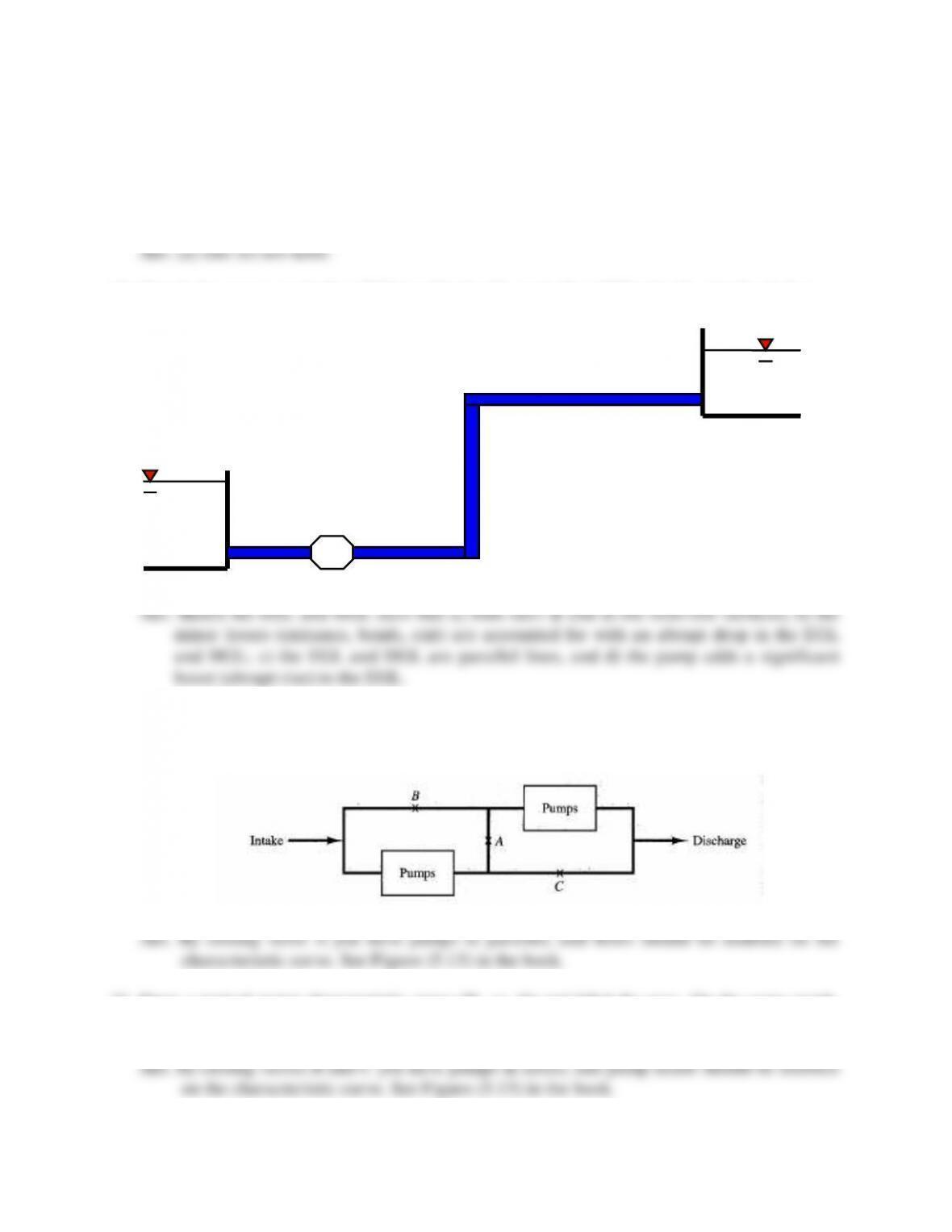 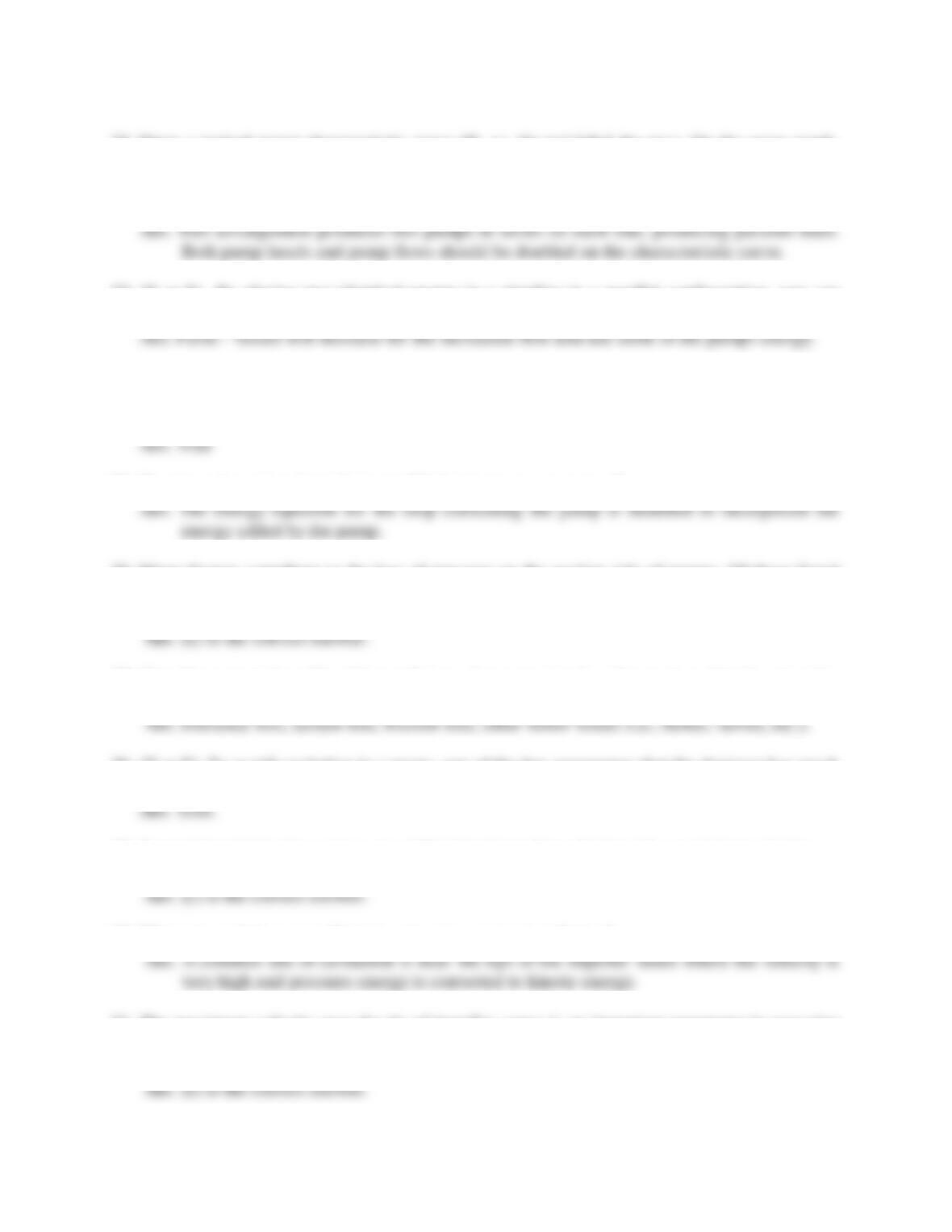 45
22. Draw a typical pump characteristic curve (Hp vs. Q) and label the axes. On the same graph,
sketch the characteristic curve for the system of identical pumps depicted in Question 20 if
valve A is open and valves B and C are replaced by two more identical pumps making a four
pump arrangement.
23. (T or F) By placing two identical pumps in a pipeline in a parallel configuration, you can
expect to double the discharge.
24. (T or F) A pump is placed in a branching pipeline and is required to pump water from a
supply reservoir to two receiving reservoirs. The total discharge will be split between the two
pipes such that an equal amount of head is added to each of the two pipelines.
25. How is a pipe network analysis modified to incorporate a pump?
26. Many factors contribute to the loss of pressure on the suction side of pumps. Of those listed
here, which does the designer of pumps have the most control over to avoid cavitation.
a) position of the pump b) screen loss c) friction loss d) entrance loss e) “b” and “d”
27. Give three examples of head losses that can be encountered on the suction side of pumps that
may contribute to the loss of pressure and cavitation problems.
28. (T or F) To avoid cavitation in a pump, one of the few parameters that the designer has much
control over is the position of the pump.
29. To avoid cavitation in a pump, one of the few items that a designer has control over is the
a) vapor pressure b) velocity head c) position of the pump d) suction line head losses
30. Where is cavitation most likely to occur in a pump installation?
31. The maximum velocity near the tip of impeller vanes is an important parameter in assessing
pump cavitation potential. It is normally supplied by the pump manufacturers using the term:
a) total suction head b) tip velocity c) cavitation parameter d) net positive suction head 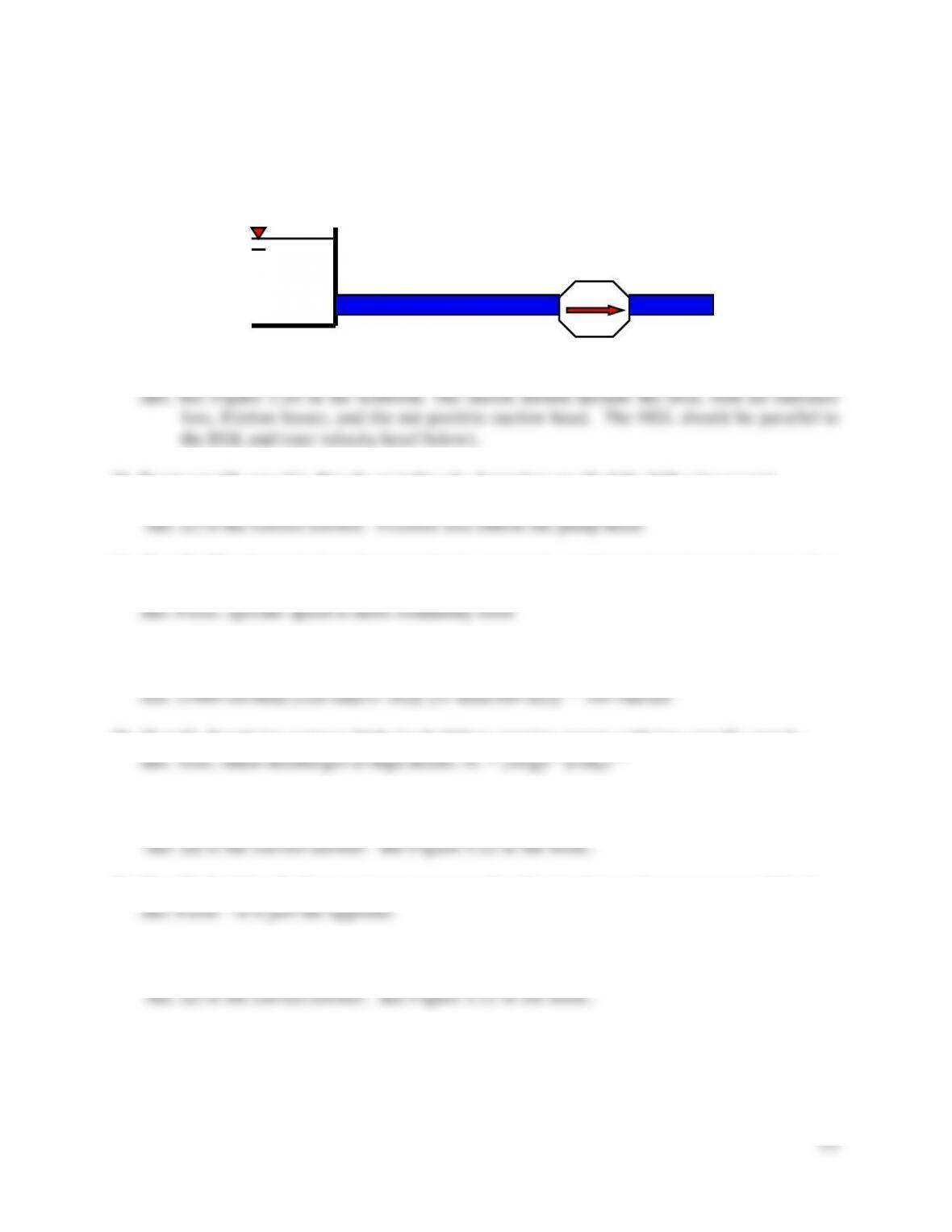 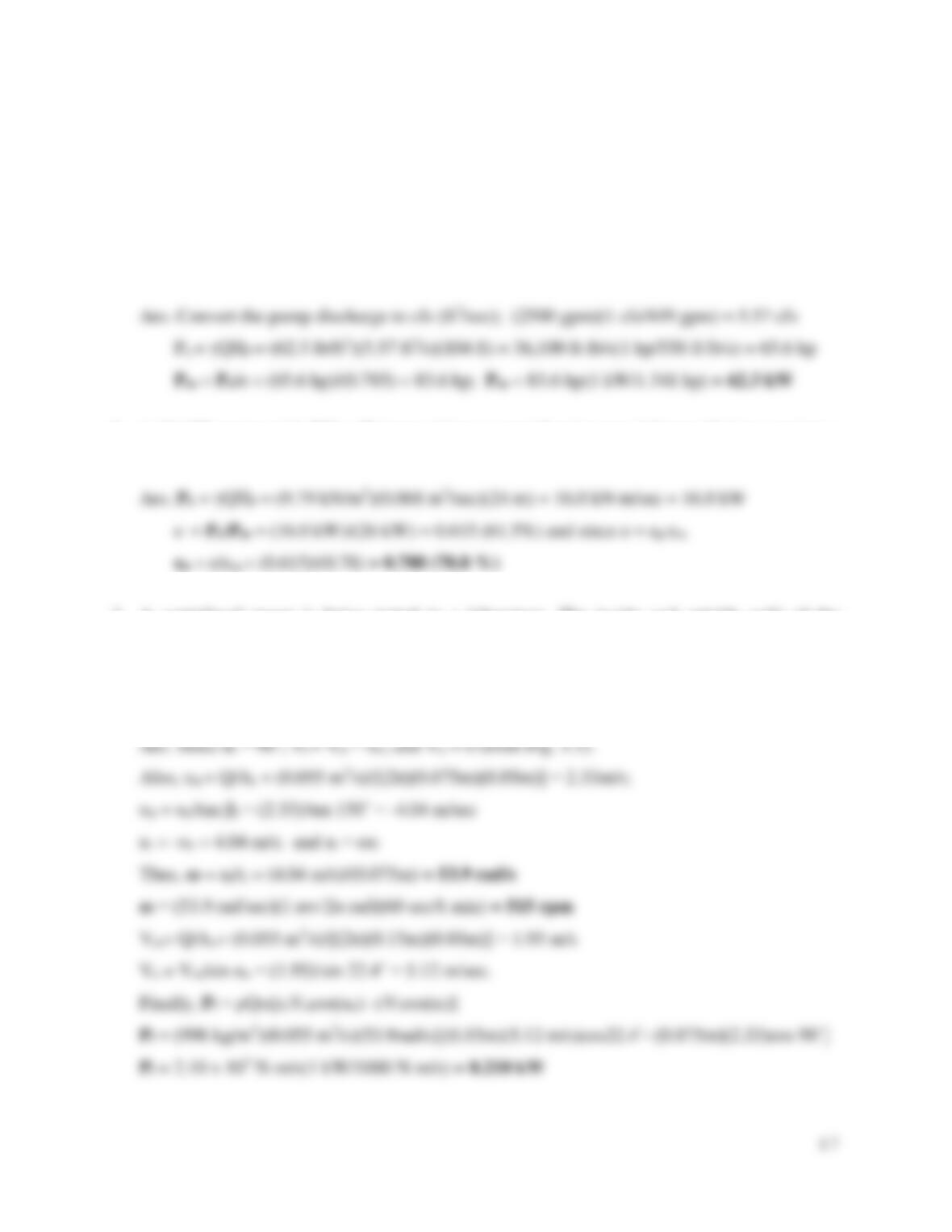 47
Problems
1. A centrifugal pump is installed in a pipeline between two reservoirs. The pump is required to
produce a flow rate of 2500 gpm (gallons per minute) in moving water from the lower
reservoir to the upper reservoir. If the water surface elevations of the two reservoirs are
separated by 104 feet, and the pump operates at an overall efficiency of 78.5%, determine the
required power input (in kW) to the motor. (Assume that pipeline losses are negligible.)
2. A 26-kW motor with 78% efficiency drives a centrifugal pump delivery 68 ℓ/sec against a
head of 24 m. Determine the pump efficiency.
3. A centrifugal pump is being tested in a laboratory. The inside and outside radii of the
impeller are 7.5 cm and 15.0 cm respectively. The width of the impeller vanes (or flow
opening height) varies from 5.0 cm at intake to 3.0 cm at outflow. If the measured flow rate
is 55 liters/sec, compute the pump speed (in rpm) and the power input to the pump (in kW).
Assume a shockless entry (αi = 90˚), an exit flow angle (αo) of ββ.4˚, and βi = 150°. 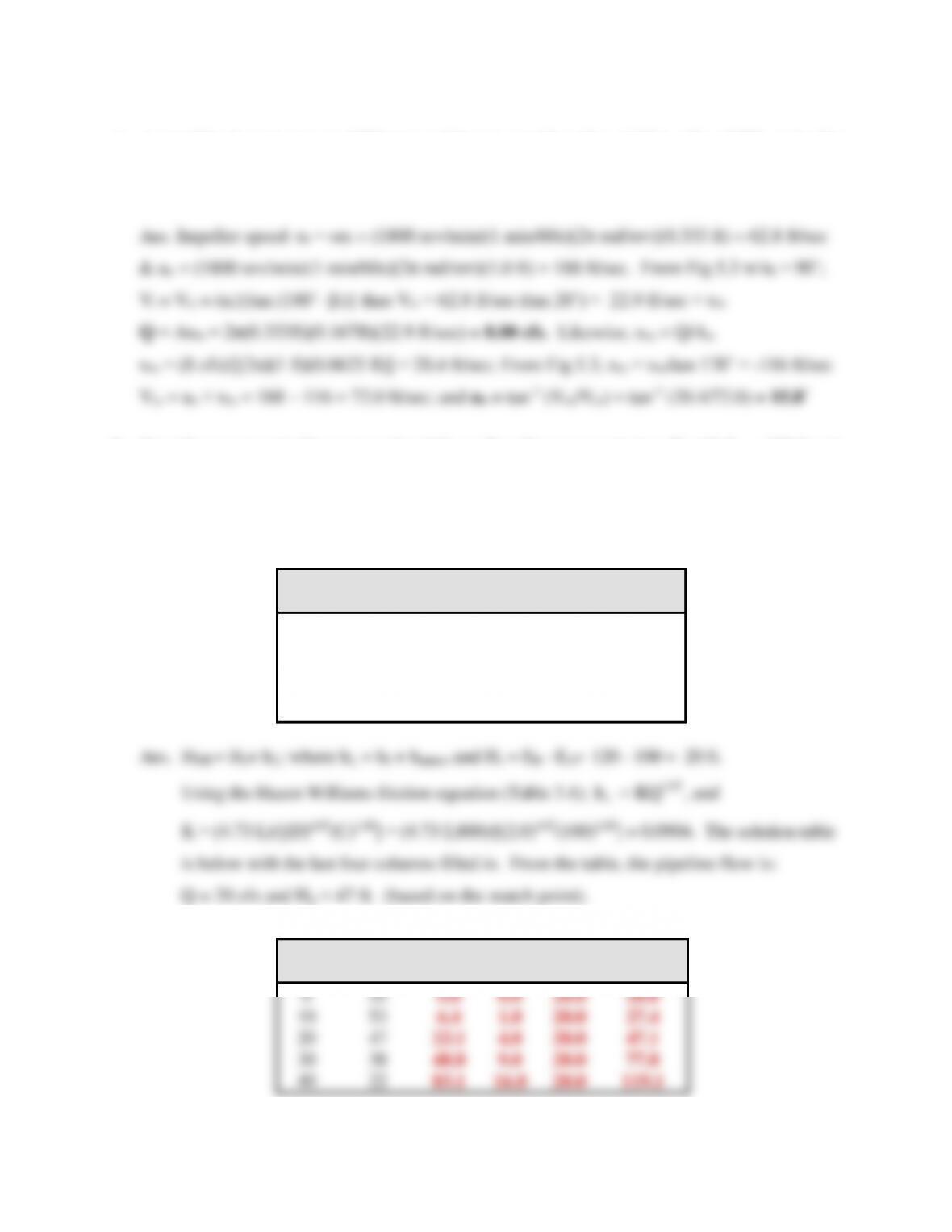