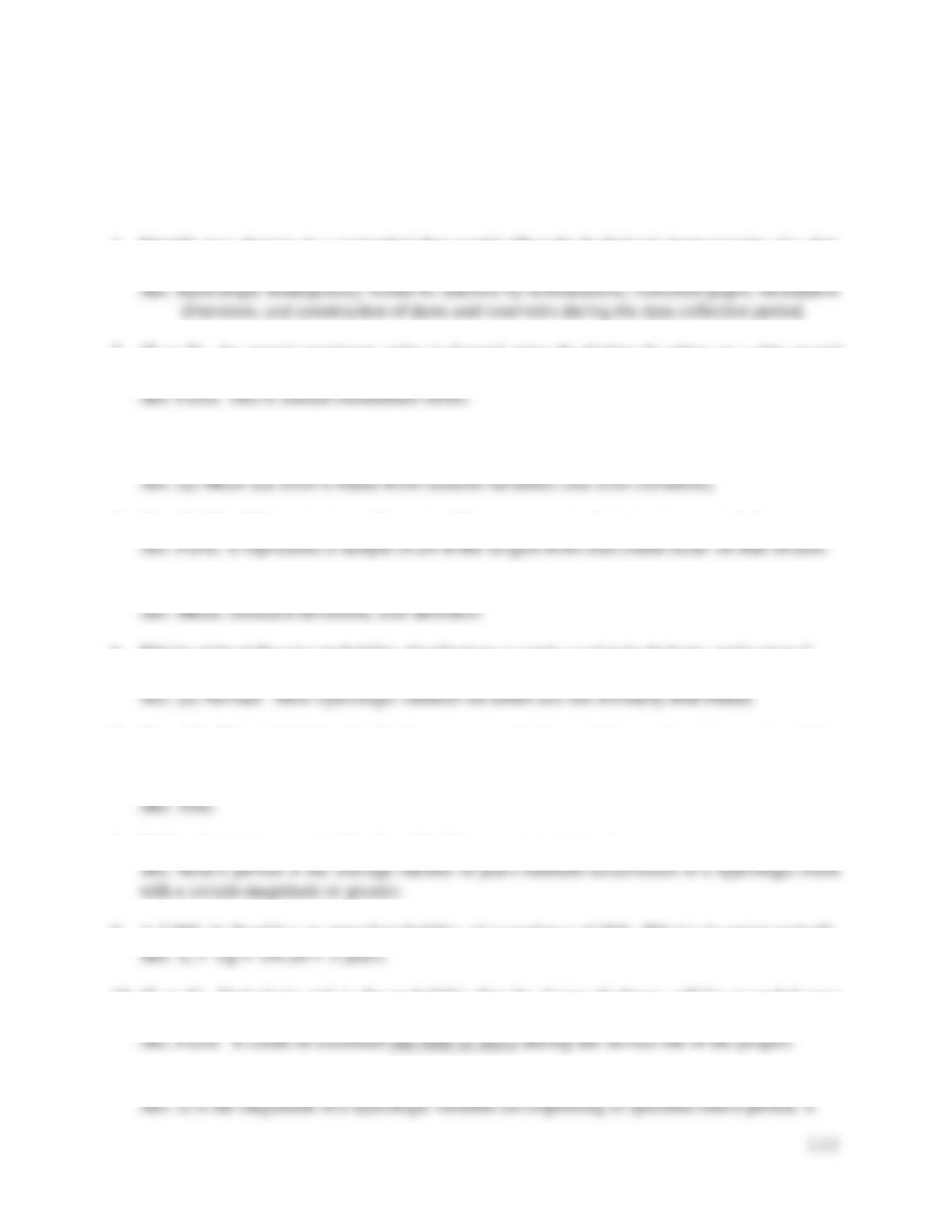 122
TEST QUESTIONS & PROBLEMS - CHAPTER #12
Short Answer Questions
1. Identify two changes in a watershed that would affect the hydrologic homogeneity of a data
set containing annual maximum stream flows.
2. (T or F) An annual maximum series is formed using the highest N values on a data record
which is N years long.
3. Random hydrologic variables include all of the following except:
a) mean sea level b) precipitation c) flood flows d) annual evaporation e) wind speed
4. (T or F) The 50 largest stream flows in a 50-year gage record represents a population.
5. Identify three statistical parameters that are useful in analyzing probability distributions.
6. Which of the following probability distributions is rarely used in hydrologic applications?
a) Normal b) Log-Normal c) Log-Pearson Type III d) Gumbel
7. (T or F) The probability distribution recommended to model annual maximum streamflow
series by the Interagency Advisory Committee on Water Data, U.S. Geological Survey is the
Log-Pearson Type III distribution.
8. Define the term return period, also called the recurrence interval.
9. A 3,000 cfs flood has an annual probability of exceedence of 20%. What is its return period?
10. (T or F) Hydrologic risk is the probability that the design discharge will be exceeded once
during the service life of the project.
11. In the closed form frequency function: xT = m + KT(s), what does xT represent?? 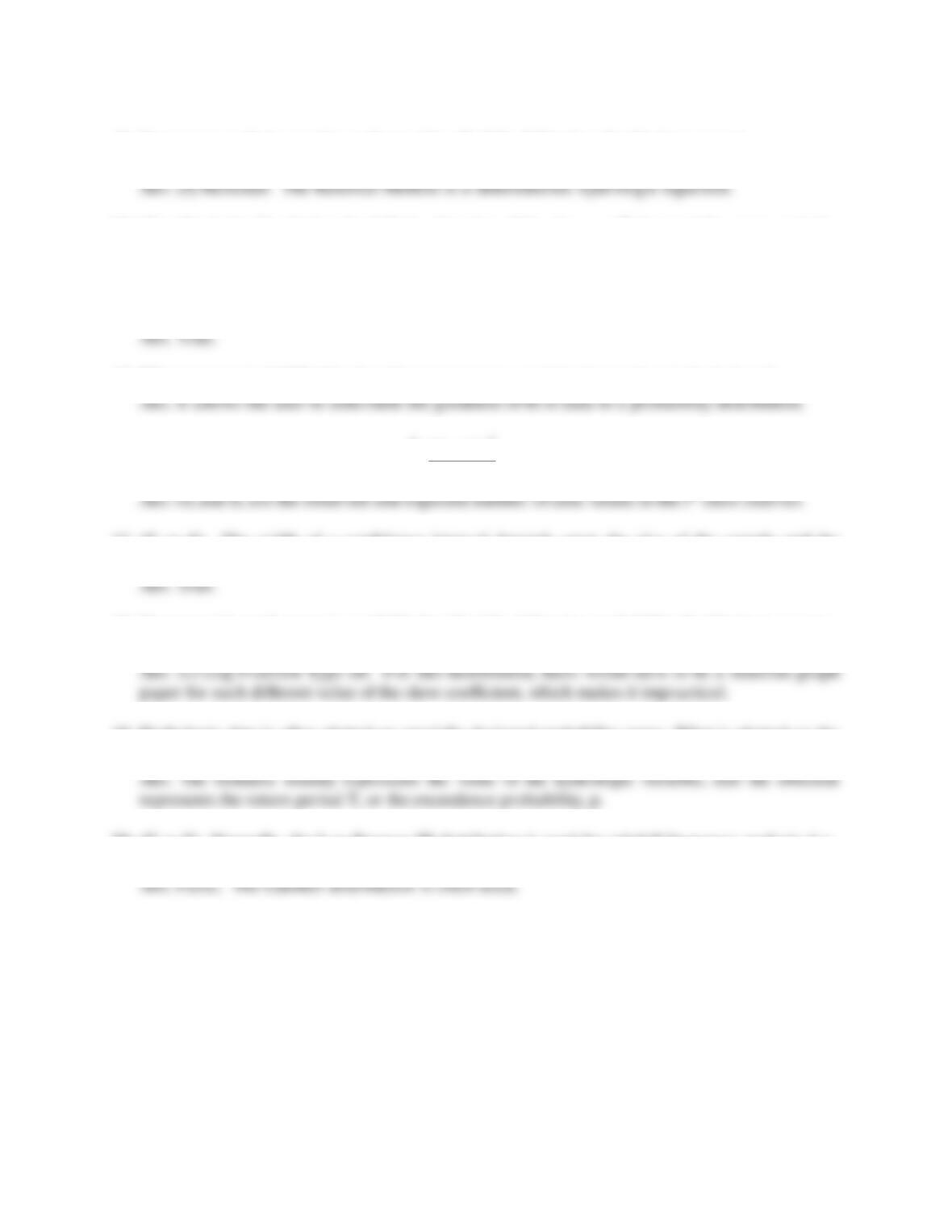 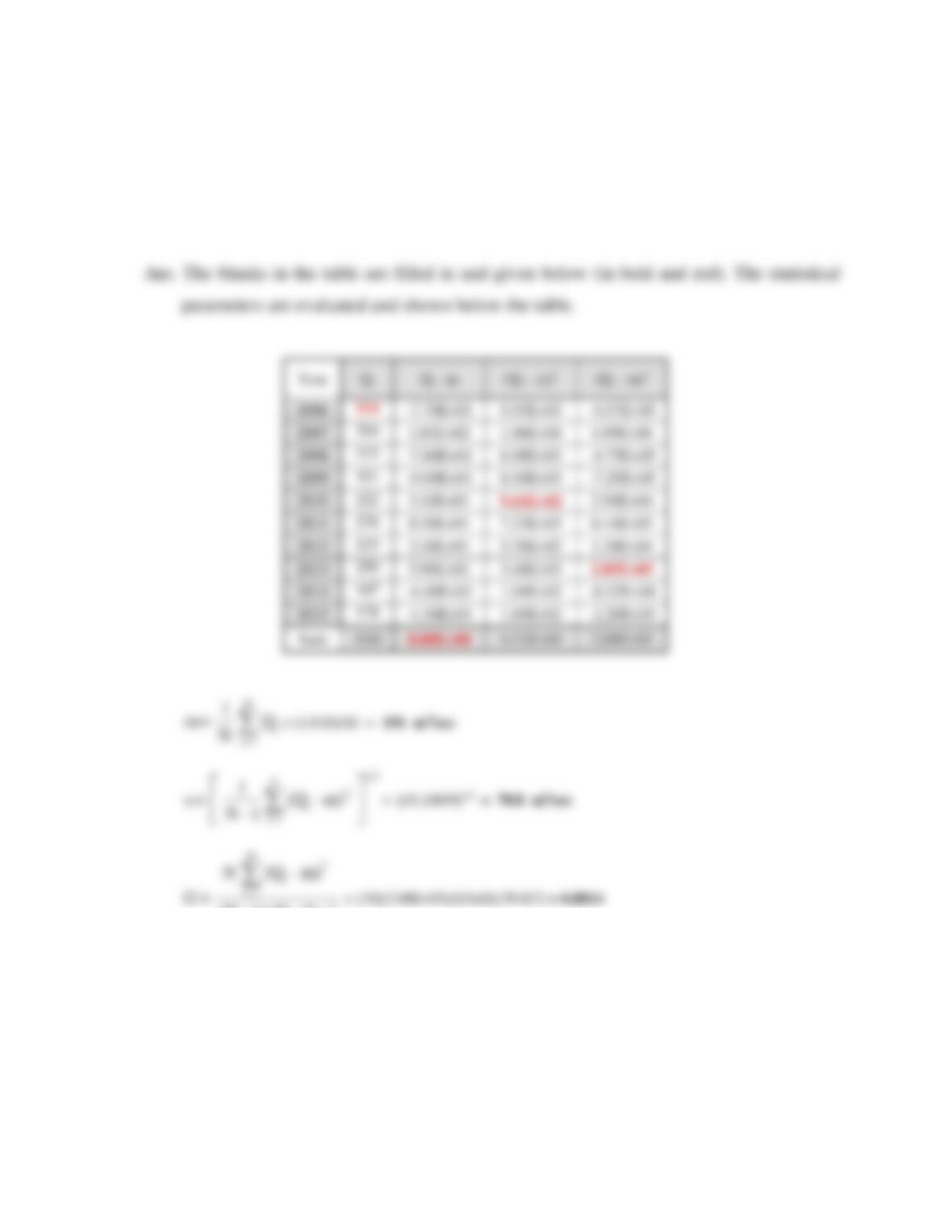 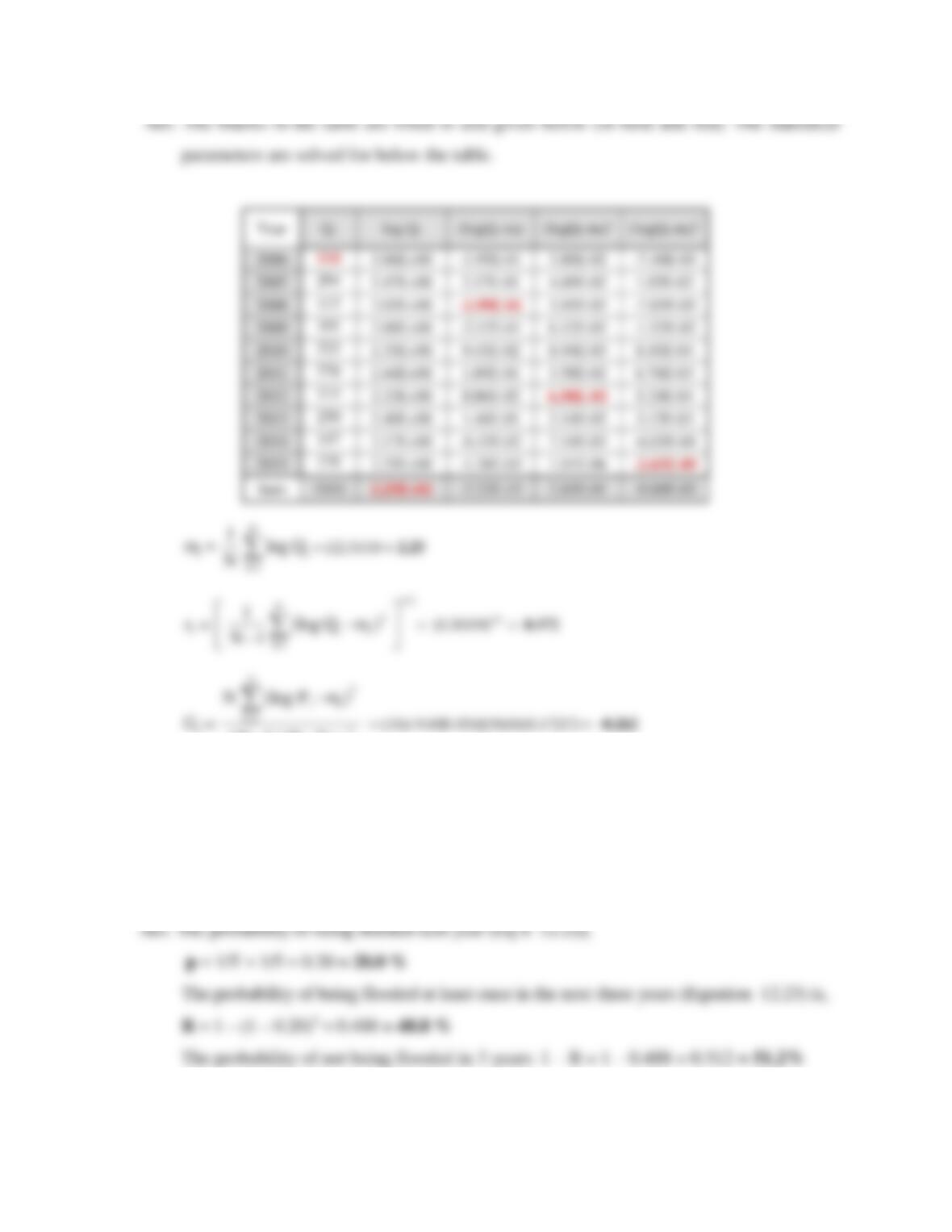 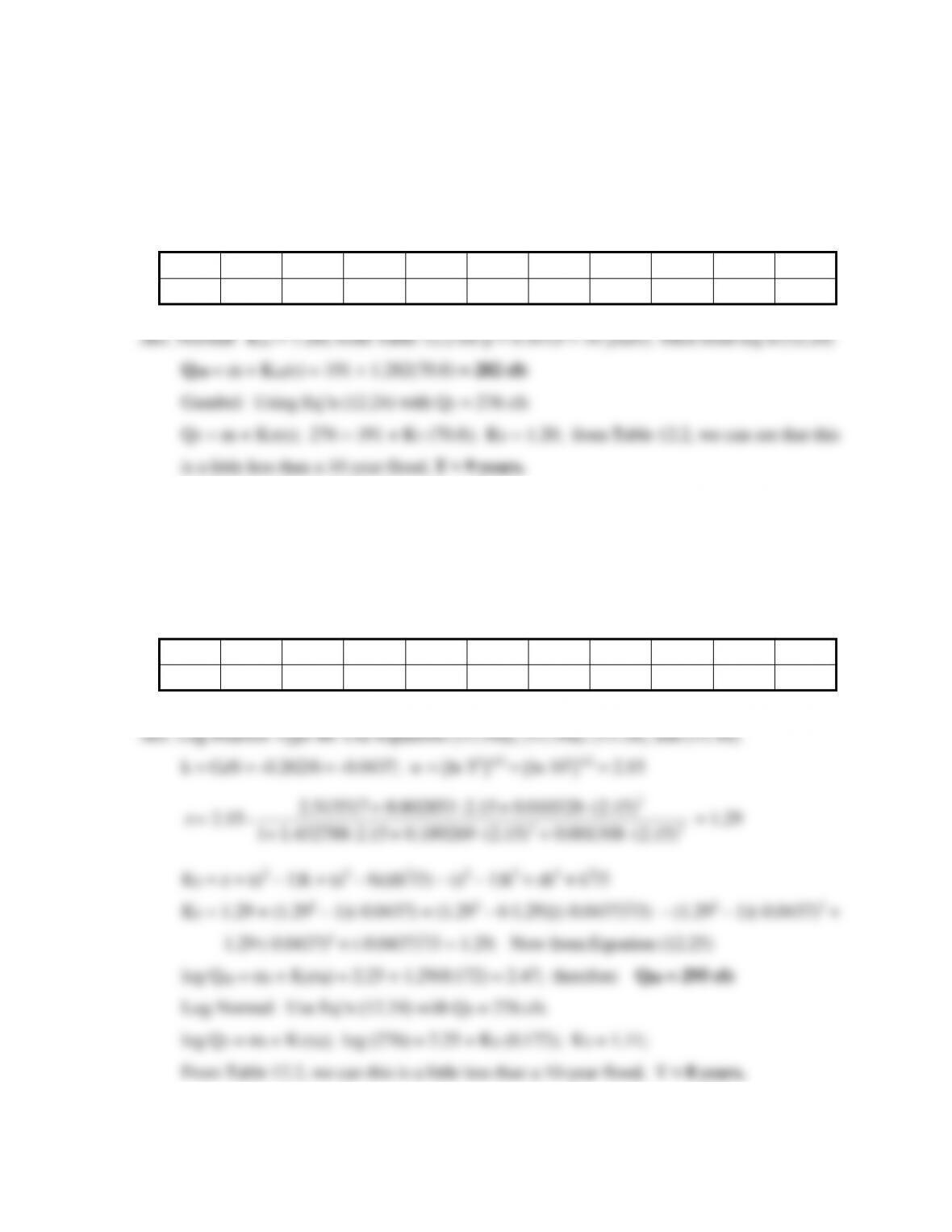 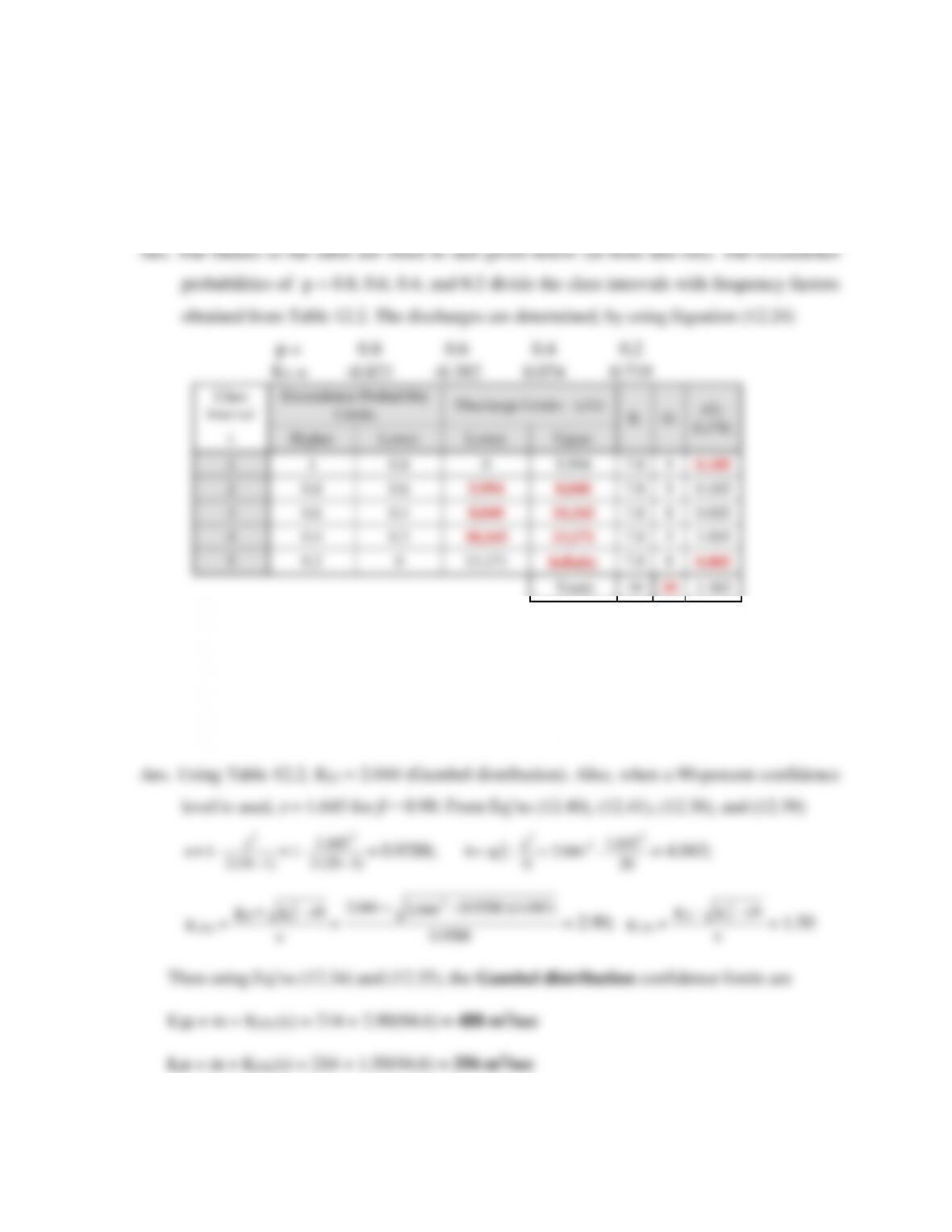 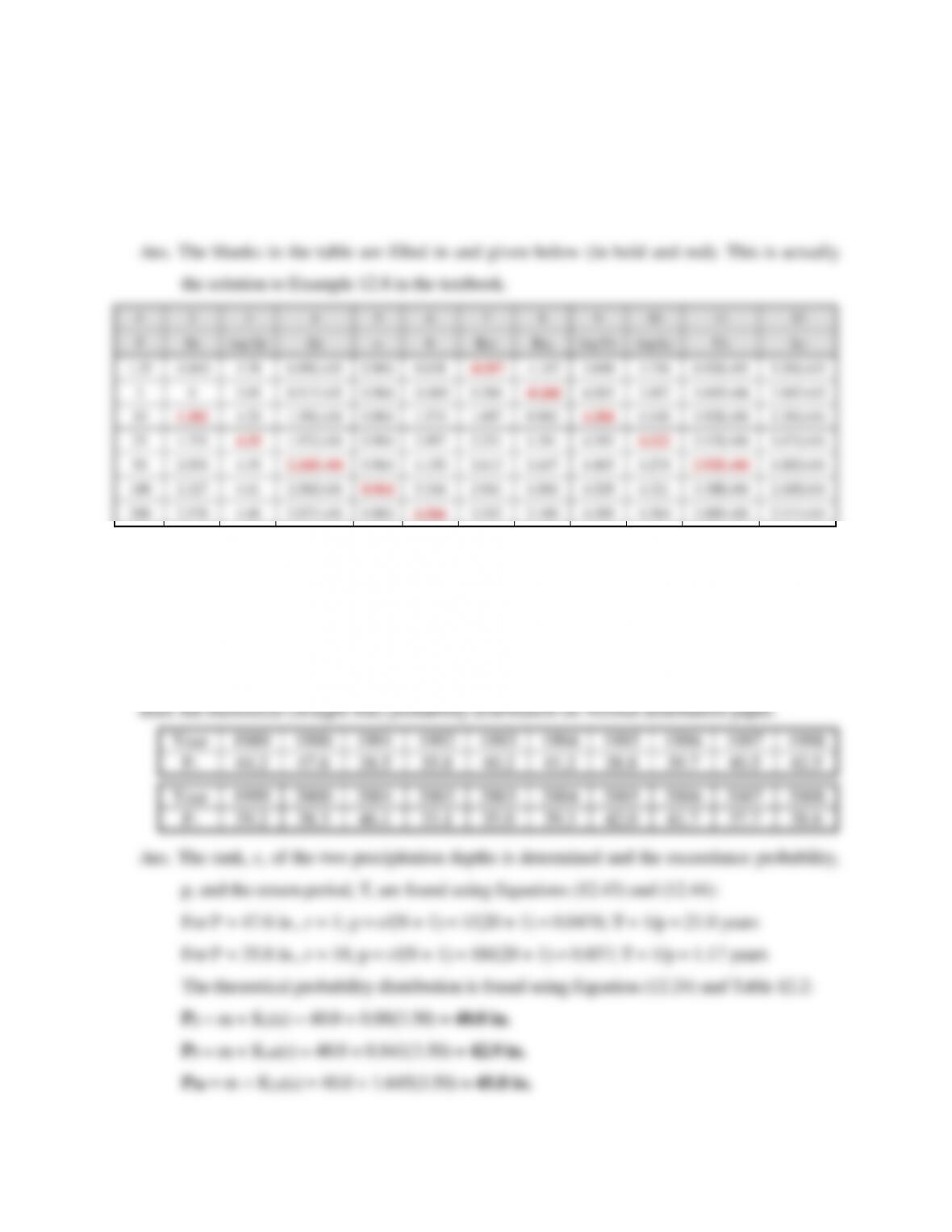 128
8. Annual maximum discharges (39 years) on a river of interest are examined to determine the
90% confidence limits for the 1.25-, 2-, 10-, 25-, 50-, 100- and 200-year peak discharges. The
sample statistics are ml = 3.95 and sl = 0.197. If the Log-Normal distribution is shown to fit the
data, fill in the blanks of the computational table below.
9. Annual precipitation measurements (Pi in inches) at location X for a 20-year period are listed
below. The distribution is Normal based on a chi-square test. If the data were to be plotted on
Normal distribution (probability) paper, determine plotting positions (exceedence probability
and return period) for two of the rainfall depths: 47.6 in. and 35.8 in. In addition, the mean,
standard deviation, and the skew coefficient for this annual series were computed to be: m =
40.0 in., s = 3.50 in., and G = 0.296. Determine the 2-, 5-, and 20-year rainfall depths in order to